by Heinrich Hall on 28 October 2020 • No commentsAnother bite, Greece Travel

Today is one of Greece's two national holidays and I realise it’s been quite some time since we’ve offered a Cretan recipe here. Mea culpa, I suppose, but better late than never.

This year would have been the eighth of running our Exploring Crete tour, a superb experience of Greece’s largest island that we have continually tweaked and improved ever since it first ran, most recently by checking out some extra sites exactly a year ago – like all of our itineraries, it is constant work in progress. So, instead of moping over not being able to run it this year, we are thinking ahead, of the next series of Cretan trips, in spring and autumn of 2021 – there’s so much to look forward to!

Crete is a place of many highlights: fantastic archaeological and historic sites, remarkable works of prehistoric art, some of the most stunning landscapes on any of our tours and cruises – and the Cretan culinary tradition.

Most travellers probably think they know more or less well what to expect of Greek food, as it is a genre well-established in restaurants internationally and – of course – in touristic contexts in Greece itself. Superficially said, it sits somewhere in the continuum that is known and appreciated as ‘Mediterranean’ food. That said, I’ll be provocative here: there is not quite such a thing as “Greek cuisine”!

There's more than gyros and souvlaki: a hearty meal served near Rethymno on Crete.

Greece is geographically and culturally rather diverse, a country ranging from the mountain chains of the southern Balkans via a series of peninsulas along a long Mediterranean coastline (the longest of any country on the Mediterranean Sea!) with important peninsulas, a number of fertile inland plains, and two great cities, Athens and Thessaloniki, to the groups of islands scattered to the west and east of the mainland. Before the age of modern communications, each of the country’s regions had its own local traditions, all of them multiply connected with one another and with areas beyond: the Balkans with its continental elements to the north, Anatolia and the Turkish/Arab traditions to the east, and Italy with its early notions of sophistication to the west - and the resulting local cuisines reflected that diversity. What most of us know as “Greek cuisine” is really an amalgamate of all those regional versions, and one that has been formulated due to the needs of tourism within Greece and those of emigrant communities and their audiences outside.

Think about it: if you have travelled in Italy, France or Turkey, even in the United Kingdom, you will have experienced the same phenomenon. What you find is a mosaic of regional cuisines that have formed over many centuries, due in part to what products are/were available in a given area, but also to long-term cultural influences and social habits.

The same is very much the case in Greece: once you penetrate beyond the ‘standard’ tourist fare and outside the beaten tourist tracks, you can explore a range of more local foods, each region featuring specialities that are distinctive, sometimes by using distinct local ingredients, usually also by showing a unique local approach to broader trends, sometimes even by representing an entirely separate tradition, like the Venetian/Adriatic dishes served on Kerkyra/Corfu. For a long time, these regional cuisines were not easy to discover, but that has changed in the last decade or two.

Crete produces a wide range of fantastic ingredients, but some of them you only get to taste when visiting the island, and only during their season! Cretan wild asparagus is one of them.

Crete, however, was always an exception: Cretans are very sure of their island's qualities, and the proud inhabitants of the 'big island' never ceased to consider their tradition the finest in all of Greece and worthy of sharing with their visitors.

And the island’s cuisine is truly impressive. Comprising of countless local dishes, some pan-Cretan, some only known in a few adjacent villages, it is diverse and strongly relies on the excellent produce that Crete, a surprisingly fertile island, abounds in: superbly tasty vegetables and greens fed by so much sun, sheep and goat grazing on the extraordinary botanic wealth of the Cretan mountains (and the wonderful cheeses made from their dairy), first-rate olive oil, herb-scented honey, and – of course – the daily catch from the waters surrounding the island.

Cretan cooks have a habit of using and combining a whole series of ingredients in ways that are quite different from what is done elsewhere in Greece, examples including raw artichoke salad, snails cooked with oil and rosemary, yellow cheeses served with honey, countless ‘wild’ greens and herbs employed to flavour any kind of (savoury) dish.

So, today, I’ll present a very distinctive Cretan dish: kalitsounia. Kalitsounia are small pies, known all over Crete in both sweet and savoury versions, the former usually relying on soft cheese and honey, the latter on various vegetable and dairy fillings. Especially in West Crete, around the old Venetian cities of Chania and Rethymno, one can encounter many versions of savoury kalitsounia, filled with spinach, greens, various cheeses, vegetables and so on.

Since courgettes (zucchini if you prefer) are currently very much in season in Greece, I’ve opted for a version using them, combined with local soft cheese (and of course I suggest substitutes more easily found). The secret of this recipe is the home-made dough, a very Cretan version of a common recipe, very different from the flaky filo that is virtually omnipresent in Greek dishes of this sort! Here goes:

- 60ml (2 fl oz) raki or tsikoudia (Cretan distilled grape spirit – if you cannot find it, use Italian grappa or an equivalent)

- 3 medium-sized courgettes/zucchinis (more if you have small ones, fewer if you have large ones: the three sizeable specimens I had were a little more than needed), peeled and grated

- 225g (0.5 lb) mizithra (a Cretan soft cheese made of sheep and/or goat milk, I used xinomizithra, meaning sour mizithra, distinguished by an acidic flavour – if you have no access to it, use an alternative, more specifically a white soft cheese that doesn’t melt but crumbles when heated – so not feta! Mascarpone or ricotta will work, but if the substitute is very mild you should add a little lemon juice.)

- a small bunch (if fresh) or a tablespoon (if dried) of an aromatic Mediterranean herb. I had mint on my balcony and used that, but oregano, thyme or even rosemary or spearmint are all perfect alternatives, and of course you can use a combination. If you use fresh herbs, de-stem and chop them, if dried ones, grind them up a little with a pestle and mortar.

- sesame seeds (nice but optional: don't despair of this recipe if you're out of sesame)

1. Start by making the pastry, several hours ahead of when you intend to bake the pies. Pour the flour, oil, raki and salt into a large bowl and mix vigorously by hand or kneading hook (if you're using a mixer/blender). If the mixture stays too powdery, add a little water, and then, in turn, some oil and some raki until you are looking at a uniform lump of fairly smooth but not very liquid dough. Cover the bowl with a kitchen towel and let it rest, at room temperature, for about two hours.

2. Meanwhile, you can prepare the filling. This is exceedingly easy. You mix the grated zucchini, chopped onion and soft cheese, add the herbs, season with salt and pepper and mix some more. That’s it.

3. Back to the dough. Take it from its bowl and place it on a lightly floured surface. Using a rolling pin (or, lacking that, just a bottle), roll it out to a very low thickness, not more than 3 or 4 mm (0.12"-0.16"). Don’t be nervous: the oil-based dough is surprisingly pliable at this stage and if something goes wrong you can always knead it back together and try again. Preheat your oven to 180°C (355°F).

4. Using a circular shape (I used a saucer about 11cm [4.3"] in diameter, but I’d recommend a slightly smaller size: a cup or a large cookie-cutter may work), cut the dough into circles. Reuse the leftover bits in between circles by re-kneading and re-rolling. You can pre-cut the whole lot, or repeat this step and the two following ones (5 and 6) pie per pie.

5. Place about a tablespoon of the filling in the middle of each circle. The exact quantity depends on the size of the circles (evidently).

6. Now, the time has come to close your kalitsounia. There are three principal ways of doing that, so it’s your choice. A) You can fold over half of the circle and then press together the overlapping rims of dough, making sure there is not too much filling. That way you end up with a semicircular closed pie. Squeeze the rims of dough together using a fork. B) You can leave the middle of the pie flat and fold two opposite sides upwards towards one another, ending up with a boat-like shape. You can squeeze the dough rims shut or leave a slight gap. C) You can simply flap the dough towards the centre from all four sides, creating a small square pocket, with a small square gap in the middle top, leaving some of the filling visible (this is not shown in my photographs, but it’s actually the least fiddly approach).

7. Distribute the pies on a greased baking tray (or with non-stick/parchment paper as a base, as I did), brush with the egg yolks and sprinkle with sesame seeds.

8. Place the tray in the oven and let the kalitsounia bake for 30 minutes or more until golden brown (it depends on your oven: mine took about 45 minutes).

9. Your kalitsounia are now ready to serve.

Kalitsounia are often served as a starter or even a cold snack (they’re delicious that way), but freshly baked ones can also make a main course, accompanied by a Greek salad, a green salad or a tomato one. You should have some of that raki left as well!n There are many other versions of this classic dish, with all kinds of fillings, so maybe I'll return to the topic some time.

If you enjoy this simple recipe (and I am sure you will), you would definitely enjoy trying a lot more Cretan dishes on our Exploring Crete tour. Check out the dates for next year! 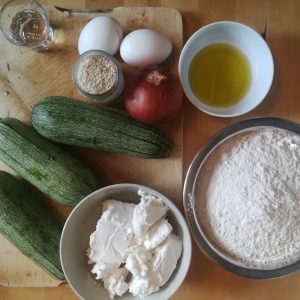 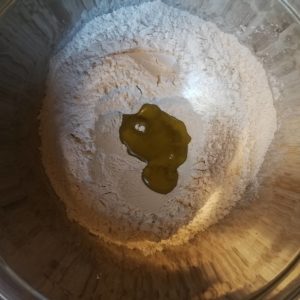 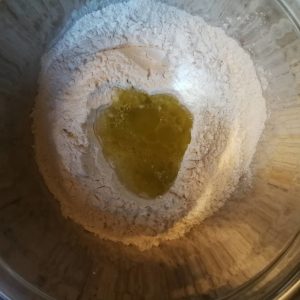 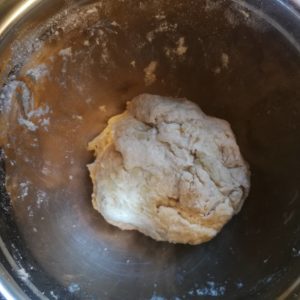 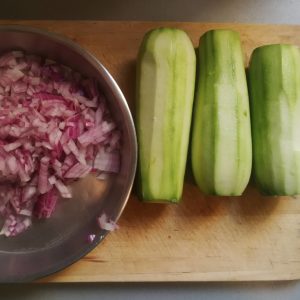 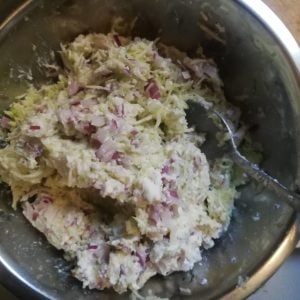 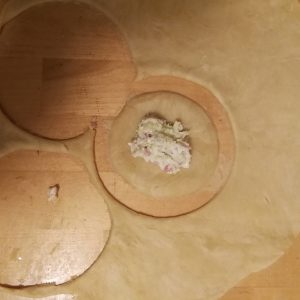 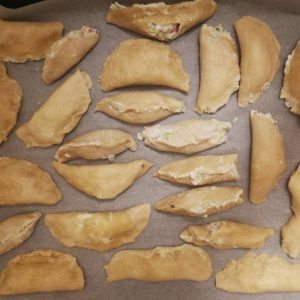