by Heinrich Hall on 15 April 2020 • No commentsAnother bite, Croatia travel

The town of Hvar on the island of that name - a place with a long history and fascinating traditions!

This is a time when we all dream of travelling. And that means we dream of taking in the impressions, the ideas, the insights, the beauties, the contrasts, the very special moments, the encounters, the strangeness, the surprises - all the new experiences that travelling brings to us. That thought also includes the flavours, scents and aromas, the meetings with the culinary traditions of the places we visit. Today, I will present you with a Dalmatian taste, one that is essential to travelling on the shores and islands of the Adriatic coast of Croatia. Brodet is a part of those dreams of travel for me, because I was served many versions of it so many times when I was exploring Dalmatia and I enjoyed them so much. Luckily, it is a flavour we can recreate, even if not perfectly, in our home kitchens.

We've written about Dalmatian cuisine before, it even has a page on Peter Sommer Travels' website. The region has a very distinctive character, as a result of its complex history, combining its location on the Adriatic coast and within the cultural spheres of Venice and Ragusa (modern Dubrovnik), two competing maritime republics. Central European and Ottoman influences have pushed into Dalmatia as well, producing a fascinating mixture.

Paradise: seaside lunch at Dingac, one of Croatia's most celebrated wine regions.

Brodet, the dish I present today, is certainly Adriatic in origin, and who knows whether it's a Ragusan or Venetian tradition to start with? The name is certainly Romance, not Slavic, in origin, but there's no surprise in that, as a Romance language called Dalmatian used to exist and has many echoes in the Croatian language spoken today in Dalmatia. There is a very similar, but not quite identical, dish named brodetto, served on the eastern - Adriatic - coast of Italy, and even a bourdeto on Kerkyra/Corfu in Greece, at the far southeast end of the Adriatic. Like pašticada, brodet is both an active tradition in Croatia's maritime regions and a memory of the Adriatic culture that created it a long time ago.

As far as I can analyse, brodet is a preparation of seafood that combines the Mediterranean flair for fresh seafood aromas with a Central European desire for solidity, for a concentration of flavours in a thickened dish. That combination makes it quintessentially Dalmatian and Croatian, a perfect example of a complex culture and a delicious expression of a very special identity.

Most of the ingredients...

- 1kg (2.2lb) mixed fish fillets, at least two or three different kinds, fresh or frozen, cleaned and skinned  (as I'm currently in lock-down, I used what I had available, namely about two thirds pollock and one third sole, both frozen. Of course, if you have access to fresh fish and/or to more typically Mediterranean species, say sea bream, sea bass or monkfish, use those. Salted cod can also be used, but needs multiple rinses first. I would avoid very fatty types of fish, such as salmon; this preparation does not suit them. You could also add some squid or shrimp into the mix. If you use frozen fish, as I did this time, take it out of the freezer and move it to the fridge the evening before the day you cook this.)

- 1/2 of a can (a large tablespoonful) of tomato concentrate

- 200ml (7fl oz) red wine (it's a Dalmatian recipe, so your best choice is a deep, dark Dalmatian red, ideally a Plavac Mali. Failing that, go for another dark red wine: Zinfandel is a clone of grapes related to Plavac, so that would certainly work, as would a southern Italian Primitivo, for the same reason. To confirm, yes, I recommend a red wine, in spite of it being a fish dish. It gives the right depth of flavour and the right colour. There are versions of brodet using white wine as well, but you can try that another time...)

- 200ml (7fl oz) stock (ideally, use a home-made or ready-made fish stock. If you don't have access to that, vegetable stock will do fine)

- 1/2 of a lemon, washed carefully (preferably use an organic or untreated lemon, as you need the zest!), zest finely grated, half lemon then juiced

- a teaspoon or so of balsamic vinegar

- An absorbent accompaniment (in Dalmatia, polenta is common, but I have also been served the dish with good white bread or with pasta - they make a kind of wheat-flour gnocchi in Dalmatia that does work very well, but this is not vital. For the reasons mentioned above, I used chilopites, the tiny square sheets of pasta common in Greece - and it worked well. Even mashed potato or split-pea fava would suit. At a stretch, even rice would.)

1. Depending on what preparation your fish requires, rinse it well and dab it dry. Cut the fish fillets into cubes or squares of medium size, about 3cm (or a little more than an inch) across. Season the fish bits (and the squid or shrimp you might add) with salt and pepper and let it all rest for a little, while preparing your other ingredients.

2. Heat the olive oil in a saucepan at medium to high heat, and when its starts sizzling in contact with a drop of water, turn it down to low-medium. Add the chopped onions and stir occasionally with a wooden spoon until the onion bits have started to turn translucent, but not brown (this will take five minutes at least). Now add the garlic, mix well and let it fry for another two minutes.

3. Add the chopped tomatoes, the sugar, the bay leaves and some salt and pepper (to taste, as they say). Raise the heat to medium high, and stir well as the mixture starts to bubble, but not boil. Let it do so for two minutes, stirring all the while.

4. Place the fish/seafood atop of the mix. Do not stir it in, it has to sit on top. Add the wine and stock. If the fish/seafood is not completely submersed in liquid, add wine and stock in equal parts until it's covered. Put a lid on the pot. Instead of stirring, give the whole pot a subtle friendly shake now and then. Once the liquid starts bubbling, turn down the temperature a little and let it be, with the occasional shake, for another ten minutes.

5. Now remove the lid and make sure the temperature is high enough to produce some steam, but below boiling. You want the water content of the brodet to evaporate, so as to reduce the mix and thicken it. Do not stir, as you don't want your seafood to fall apart: the occasional shake will do. Check the level of liquid at the beginning of this process and end the process when it has reduced to about half - this should take about 20 to 30 minutes at a medium high temperature, and up to an hour at medium low. I recommend the latter, if you have the time - it makes for better flavour on the first serving. Meanwhile, you can start preparing your polenta, pasta or other accompaniment.

Brodet, ready to be enjoyed.

6. Once the brodet liquid has reduced to about half its volume/level, take the pot off the heat and let it rest for fifteen to twenty minutes. Remove the bay leaves if you can find them.

8. Your brodet is now ready to serve. Depending on the accompaniment you've chosen, place it on a plate or in a bowl, make a nest, and spoon the brodet on top. I say this for most recipes: a green salad goes well with it.

There you are. Enjoy it. And for a more authentic brodet, join us on our many Dalmatian cruises, to taste the real and local versions. 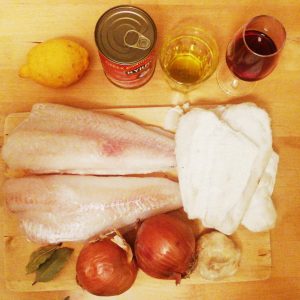 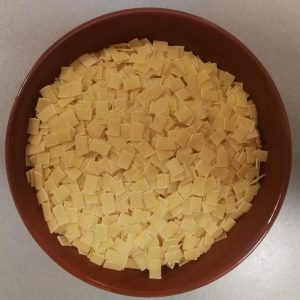 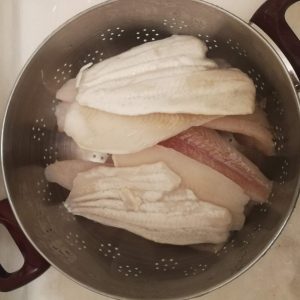 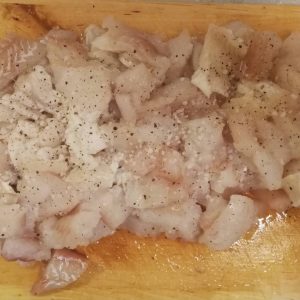 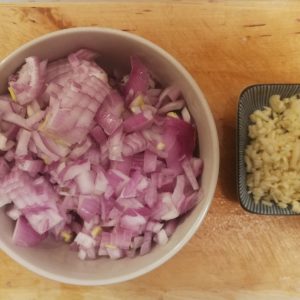 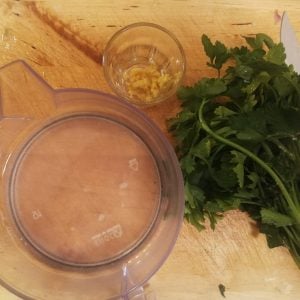 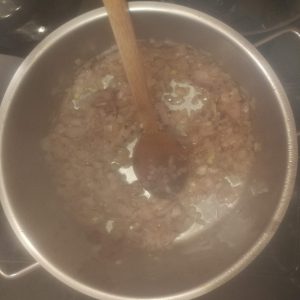 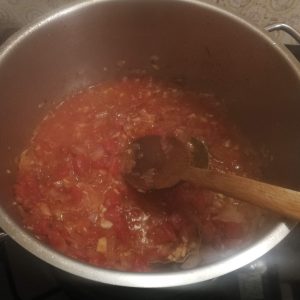 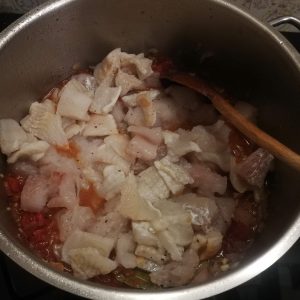 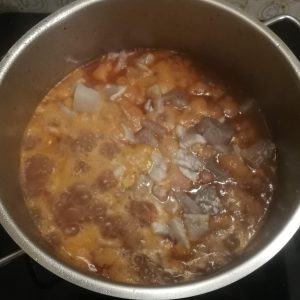 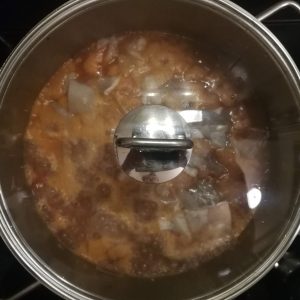 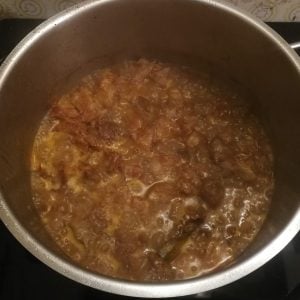 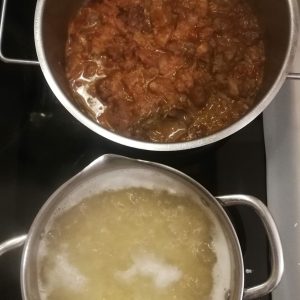 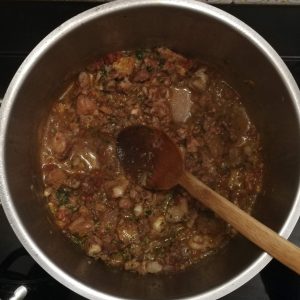 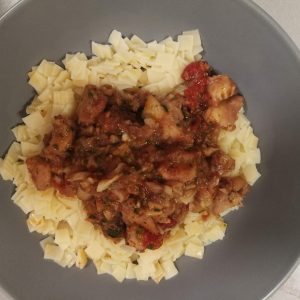