by Heinrich Hall on 3 April 2020 • No commentsAnother bite, Italy travel

It's been a while since we have been offering a recipe here, but in these days of spending much time at our homes, we thought it might be useful to delve into our culinary repertoire again - we'll try to do so regularly over the coming weeks.

Today, I'd like to present a well-known - but often misunderstood - Italian classic, or more precisely a Roman one. It's pasta alla carbonara, and like other Roman pasta recipes, it is characterised by the combination of very few and very simple ingredients, achieving a compelling result.

Of course, I'll first digress a little, because like many of these 'classic' dishes, carbonara has a story, or really several. Telling stories is a big part of what Peter Sommer Travels does, and as such stories tend to, this one conjures up a little of the country's unique history and also a tiny bit of controversy.

This is a selectively blurred image of a jarred tomato-and-basil sauce by a very popular Italian brand, even better known for quality pasta. It's fine and good - I use it myself at times (that's why I was able to take this photo). Tomato-based sauces can work quite well this way, if you don't have the time, energy or materials to cook your own. But if you see a similar jar (by any brand) labelled carbonara, at least be aware that it's not carbonara in the sense of what that dish really means, and that it doesn't save you a lot of either time or effort or money compared to a real pasta alla carbonara. Carbonara in a jar is essentially a pre-cooked creamy sauce, and if you like that, go for it, too. But try our version as well. And yes, please support Italian producers. They make many uniquely delightful foods of very high quality.

First of all, if you were raised (like myself) somewhere other than Italy, there's a good chance that you grew up with the misconception that carbonara is a kind of sauce, most likely a fairly heavy one that includes cream and bacon, perhaps mushrooms as well. Indeed, that concept of carbonara has become so widespread that some might consider it the 'global' definition of the name. It's what is served in many 'Italian' restaurants the world over, the kind of place where you choose a type of pasta and a type of sauce, both are then cooked separately (the sauce may have been pre-cooked), then combined and plated (or packed for delivery). Nowadays, that kind of carbonara sauce is sold ready-made in jars, or (perish the thought!) as a desiccated powder.

The authentic Roman alla carbonara, however, is not even a sauce - it's a preparation created by combining pasta with other ingredients. Importantly, it does not use cream as a binding agent, but eggs. Equally as importantly, its main carriers of flavour are pork and cheese. Also, it is so easy to make that there really is no need for a ready-made or 'instant' version.

Incidentally, like many things we perceive as 'traditional', pasta alla carbonara is not as old as one might think. Its name can be traced with any certainty no further back than the 1940s.

There are different theories as to the origins of the dish and in Italy, they have been debated passionately.

The name, meaning 'pasta in the style of charcoal-burners', is seen by some as an indication that it came from a region where that craft was commonly pursued, which would strongly suggest the Appenine mountain range that runs through the Italian peninsula, most likely the Abruzzo region. The idea is that the few ingredients would have been durable and portable and thus appropriate for men working often far away from their villages. That makes we wonder about the eggs, though. Others believe that the name is simply derived from that of a restaurant in Rome, where it might have been a signature dish (there appear to be several candidates). It has also been argued that the dish goes back to the cuisine of Naples, a source of many great Italian recipes, and indeed a reference to a pasta-end-egg dish can be found in an 1837 book of Neapolitan cooking, but it treats the preparation quite differently.

Many things make up what we consider Roman culture and heritage. The cuisine of this extraordinarily long-lived city is part of that.

The most often-repeated theory, however, links the dish directly with the period when it first appears under its modern name, namely the immediate aftermath of World War II. Following the Italian capitulation of September 1943 and the subsequent German occupation, Rome was liberated by the Allies on June 4th of 1944. The devastation of the war and the temporary collapse of supply networks led to food shortages in the city. It is striking to note that the two main ingredients of alla carbonara, other than pasta and cheese, were common elements of US Army rations: cured pork (bacon) and egg (in powdered form), while dried pasta and hard cheese were (of course) standard items of household larders in Italy. The commonly-told story ascribes the invention of alla carbonara to these particular circumstances.

Personally, I'm not quite convinced. In history, single-strand explanations should always be treated with a pinch of salt (see what I did there?). Very simple pasta dishes were certainly a feature of Roman working-class cuisine before the war. Could it be that some version of the dish now known as carbonara already existed, but the availability of those specific ingredients in the mid-1940s led to its popularisation, perhaps also modification?

One way or the other, the Roman alla carbonara, like the cacio e pepe we posted some time ago, is an unpretentious and not very heavy dish of few ingredients (just four, plus oil, salt and pepper), all of which are likely to be available in your kitchen. Making it requires little time and no complex culinary skills.

Of course, I would not dare to claim that the recipe I offer here is in any way 'definitive'. There are probably as many subtle variations of pasta alla carbonara as there are households in Rome or Italy, and those cooking them are likely to have strong feelings about their unique qualities. The version described below is what I was taught a little more than a decade ago by a Roman colleague staying at the Irish Institute in Athens (my workplace at the time). It is deceptively simple, it works every time and it is delicious.

- 1 pack (500g/18oz) Italian dried pasta (I suggest a long variety, such as spaghetti or linguine, but on Roman menus rigatoni are also commonly offered)

- 150g (5oz) cured pork, diced (if you aim for extra authenticity, get one of the typical Roman varieties, like pancetta - salt-cured pork belly - or guanciale - salt-cured pork jowl, which leads to very delicious results. Otherwise, just use good bacon, as I did in the version illustrated here. After all, part of the charm of the dish is that it can be made with simple and easily available ingredients!)

- 125g (4.5oz) hard salty cheese, finely grated (ideally, I would mix two parts Pecorino Romano with one part Parmigiano-Reggiano, but it depends on what's in your larder)

- 3 tablespoons of extra virgin olive oil (if you want a richer flavour, replace half of it with butter)

1. Fill a sufficiently large saucepan with water and put it on high heat. Once it starts boiling, add salt (don't forget that the cheese you are using ought to be quite salty, too) and throw in the pasta. Boil according to the instructions on the packaging (if you want it less al dente than the Italian preference, add a minute to the cooking time).

2. Heat the oil (or oil and butter) in a second saucepan, big enough to take in the pasta later. If that's not an option, use a frying pan (preferable a non-stick one, as you will have to move all the juices and frying aromas to another vessel). Add the pork, let it sizzle at medium heat for a minute or two for the fat to melt, then reduce to a lower temperature and let it cook, stirring occasionally with a wooden spoon. Once its starts turning brown, after five minutes or so, reduce the heat to a minimum.

3. Just before the pasta has reached its allotted time, scoop out half a cup of the pasta water. You may or may not need it shortly (or for reheating the dish tomorrow). On reaching the correct time, drain the pasta.

4. Now add the pasta to the pork and oil. If you've used a frying pan for those, do it vice versa: return the pasta to the waterless saucepan and pour the contents of the frying pan onto the pasta, using a spatula to transfer as much of of the oil as possible (it carries much of the pork flavour by now). Replace on the ring on which you cooked the pasta to use its residual heat. Mix well with your trusty wooden spoon.

5. Take the pot/pan off the heat and add the beaten eggs and half of the grated cheese. Mix everything immediately and energetically. You want the egg-and-cheese mixture to form an even coating on all of the pasta. The mixture should make an appetising slurping noise as you are stirring. If it does not, and only then, add very small amounts of the pasta water until it does.

6. Add the remaining cheese and black pepper to taste. Extra salt should only be necessary if you used a different cheese from what we suggested. Mix well once more and serve immediately·

That's it. Plain and simple. It can be accompanied with a green salad, or preceded by a very simple tomato salad (without cheese).

For variation, you can cut three (peeled) cloves of garlic in half and fry them alongside the pork. Make sure to remove them as soon as they start turning brown (so the garlic does not burn and turn bitter). From a practical point of view, I add one note: pasta alla carbonara does not improve with reheating, but it does allow a single re-serving. If you have leftovers (say you cooked the serves 4 version above for just two people), keep aside your leftover cup of pasta water (if it's for one day, you don't need to bother with a cool or dark place unless you live on Venus, and it really shouldn't be for more than a day). Add some of it to the pasta before reheating.

Of course, you can find many authentic Italian versions of pasta alla carbonara, including ones quite different from this one, on Peter Sommer Travels' expert-led tours of Italy and especially on our Exploring Rome. 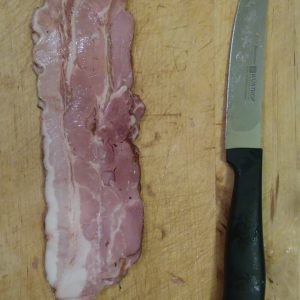 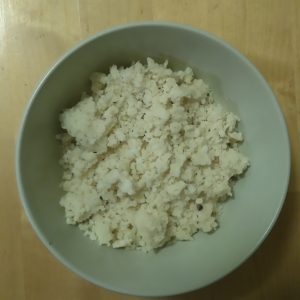 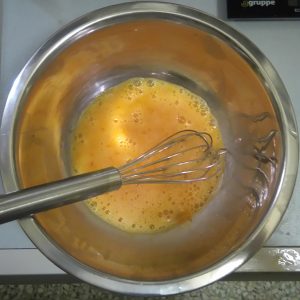 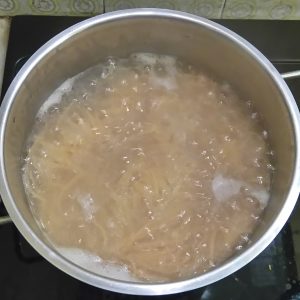 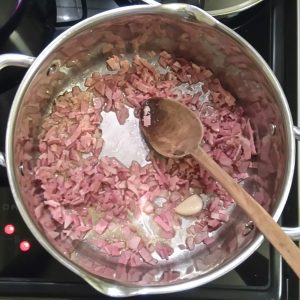 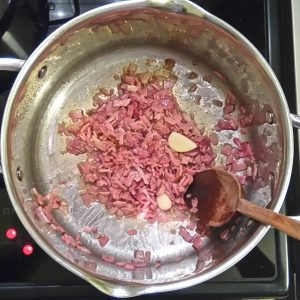 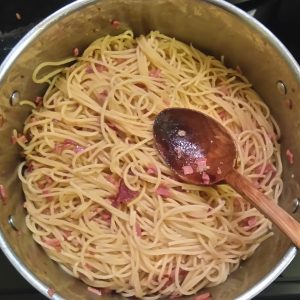 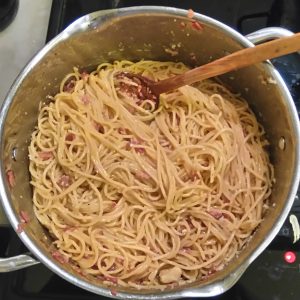 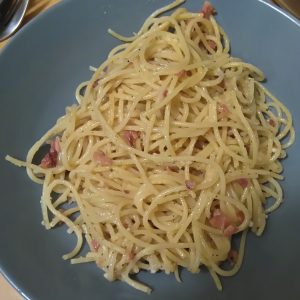