Another bite - beef youvetsi, a hearty Greek bake of meat and pasta

by Heinrich Hall on 4 May 2020 • No commentsAnother bite, Greece Travel

In Greece, we have spent many weeks under lockdown and are now looking forward to a gradual easing of the restrictions, beginning today and continuing throughout the coming weeks, if all goes to plan. Since we are not able to travel these days, I have ample time for the kitchen. I've always enjoyed cooking, and clearly many of our guests do. I don't know what you think, but as I see it at the moment, cooking can also serve as a reminder of the places we travel and the many specialities we love sharing with our guests during Peter Sommer Travels' tours and cruises. It certainly does so for me, and I hope it can do the same for you.

Today, I present a very traditional Greek recipe, equally at home in people's family kitchens as it is on taverna tables: beef youvetsi (you'll also find it transcribed as giouvetsi - I chose the spelling closer to the Greek pronunciation, with the stress on the e). It's a slow-cooked dish of meat and pasta. The pasta part defines it.

"Three men, three peoples, three religions, but as a common characteristic they shared a great desire for youvetsi, which they ordered from the neighbourhood bakery, with very thick pasta (...)" . From A. Papadiamantis, "The Impact of the Mind (Aniktypos tou Nou)", 1910.

Youvetsi belongs to the category known as mayirefta ('cooked ones') in the Greek tradition, generally describing slow-cooked dishes. A long time ago, before the advent of domestic kitchen appliances, these were prepared at home for festive occasions, then brought to the local bakery to be placed in the oven, and picked up after a few hours (that's in an urban context - in the villages of the mainland and the islands some houses had their own outdoor ovens, so you might rely on the neighbour rather than the baker, depending on circumstances). These dishes are - I'm generalising of course - characterised by a complex blend of rich flavours and usually tender textures and one of their key ingredients is time itself. Youvetsi certainly meets that description; in many of its modern versions it is first slow-cooked and then slow-baked, allowing the meat to soften and the spices to emanate their distinctive aromas throughout the dish.

The clay pot whose that gave its name to the dish originally is not a requirement any more in Greece. Here's a youvetsi in a pyrex dish...

The origins of youvetsi are not very clear. Its name is undoubtedly of Turkish origin, as are those of many Greek dishes, reflecting the long era when the Ottoman Empire controlled much of southeastern Europe and when Greek life happened in that context and adopted some of its words. In Turkish, the word güveç defines a specific type of clay vessel, and by extension food slowly cooked, or rather baked, in such a container. To this day, Turkish cuisine uses the term in association with other words, to describe food prepared that way: güveçte et (meat baked in a clay vessel), güveçte tavuk (chicken baked in a clay vessel), güveçte mantar (mushrooms baked in a clay vessel), and so on. All of these are dishes slowly heated in the oven and they invariably include more ingredients than the one named.

The term became widespread in the Balkans and remains so. It is certainly well-known in Bulgaria, where it is đuveč and describes a similar type of dish, slowly baked in a clay vessel, or cooked in other ways. Bulgarian đuveč comprises a variety of options, ranging from a vegetable dish similar to ratatouille to more meaty options. Versions of the name and the dishes it implies are common enough in Romania, North Macedonia and beyond.

One of the joys of living in Greece is weekly access to excellent local produce in countless street markets. This one's in my neighbourhood (image taken before social distancing requirements).

That's a historic starting point and it makes sense. But in Greece, it has led to a different trajectory, both in culinary terms and in semantics. The cuisines of Turkey and Greece share many words (and in both directions), but they often describe different things when using them. Thus, Turkish cacık is a  cold garlic soup, while Greek tzatziki is a thick garlic-and-cucumber dip, and Turkish mousaka is an aubergine-and-meat stir-fry, while Greek moussaka is an oven-baked dish of the same ingredients (more or less), topped with béchamel.

Youvetsi is a good example of such differing trajectories. The word has taken on a distinctive meaning in Greece. Instead of a vessel, it describes a preparation, a slow-cooked dish of meat and pasta. Pasta is most definitely not an indispensable (or even common) part of the definition of Turkish güveç or Balkans đuveč, but in Greece it defines the dish to such an extent that pasta infused with meat flavour, cooked or baked, in a clay vessel or not, is what the name youvetsi now means.

That change in meaning goes back a long time: the pasta definition is present in Greek recipe books before 1900, and I suspect it began in urban contexts, where the dish became an affordable option for those who couldn't cook at home.

Over a century ago, the Greek novelist Alexandros Papadiamantis (1851-1911), known for his authentic descriptions of the life of the common people in Greece, wrote repeatedly of what is recognisably youvetsi, as an affordable food that groups of non-affluent men meeting to socialise would consume together, with or without the meat, depending on what they could afford at a given time.

"That evening, he was invited to join a group of friends. Seven or eight friends, inseparable. They loved life, youth. One of them served youvetsi every evening. The others ate. He was a lottery-ticket salesman and made ten or fifteen drachma a day. What to do with it? He served youvetsi and treated his friends." From A. Papadiamantis, "The Impoverished Dervish (O Xepesmenos Dervisis)", 1896.

So, we're looking at a dish that has a history spanning centuries, well-established and well-defined. As always, the version I offer here is not definitive - how could it be? There are many youvetsia. You can cook youvetsi entirely on the stove-top or entirely in the oven. You can use beef (as I suggest here), lamb, chicken, rabbit, or even seafood. Your choice will affect how you should cook it. Chicken will require a faster approach, lamb an even slower one, rabbit a more differentiated take, octopus a sea-change (including a different start and more wine). That's why we have chosen a simple option here: start with beef. Next time, be inspired.

- 500g (1.1lb) tomatoes (that's two large ones or three medium-sized ones), peeled, de-seeded and chopped (a little more than the contents of a can will also do. If you don't have access to aromatic tomatoes, add a tablespoon of tomato concentrate)

- 1.5 teaspoons juniper berries (if you are in a part of the world where allspice is much more easily available, you can use it, but please promise that you looked for juniper first)

- 1 cinnamon stick, broken in two or three pieces (or 3/4ths of a teaspoon of cinnamon powder)

- 1 glass dry red wine (ideally, use a Greek one, say an Agiorgitiko from the Peloponnese or a Xinomavro from Macedonia)

- 1 cup of grated hard yellow and salty cheese (in Greece, I use kefalotyri and I recommend using it if you can find it. Otherwise, a similar cheese, say pecorino romano, is a good alternative, but not one with too complex a flavour, like mature parmigiano)

1. Having prepared all your ingredients, heat half the oil in a large saucepan over a high temperature. Add the meat, reduce the temperature to a high medium and stir very frequently for about 10 minutes with a wooden spoon, until the meat cubes have browned on all sides. Don't let them stick to the pan.

2. Add the onion and continue to cook, stirring frequently, for another 10 minutes, until the onion pieces are soft and beginning to be translucent.

3. Now stir in the chopped tomatoes and all the spices (juniper, bay, cinnamon, sugar, garlic, as well as salt and pepper to taste - but keep in mind that later you'll be adding a salty cheese), bring it to just about boiling and then reduce the temperature to low. Put a lid on and let the mixture simmer for 45 minutes. Check and stir occasionally: if it seems close to cooking dry (very unlikely), just add a bit of liquid (half water, half red wine). Near the end of the process, preheat the oven to 180° C (360°F).

4. While the meat is simmering, prepare the pasta. Boil it in copious salty water for a minute less than is indicated on the packaging (likely 12 or 13 minutes for orzo/kritharaki, but check), or until it reaches a texture just softer than al dente. Drain the pasta and break it up a bit with your wooden spoon.

5. Take the meat mixture off the heat and remove the cinnamon, the bay leaves (if you can find them) and the garlic. If you're obsessive-compulsive, you can also remove the juniper berries.

6. Transfer the entire meat mix to an oven-proof dish (clay/earthenware or pyrex). Add the pasta and the remaining oil and red wine, and mix everything very well. Make sure that the chunks of meat sit on the bottom of the dish and are well-surrounded with pasta and liquid, and also that the pasta is infused with liquid (the noodles have a habit of sticking together in lumps, so break them up and spread them among the chunks of meat). Then, sprinkle the cheese on top and stir once more, very lightly (this is not to be a dish with a cheese crust, so you don't want the cheese sitting on top, but neither do you want it stirred evenly throughout the contents: it should be mixed just into the top layers of the pasta).

7. Place the dish in the oven and let it bake for 30 minutes. If there is still a level of liquid at the bottom of the dish, cover it with tinfoil (pierced aggressively with a fork) and let it bake for 15 more minutes (you want the liquid to evaporate and transfer its flavours to the pasta, but without burning the top layer).

8. Remove from the oven, let it cool down for a few minutes and serve.

9. This is very reheatable (in my experience it is always even tastier on reheating!). Do so in the oven, covered with tinfoil (the youvetsi, not you!). Only if it seemed too dry on the previous serving, add a little water (note: I normally don't find it necessary to add liquid even on a further reheating).

That's all. It's a dish that comes with its own accompaniment. If you want to give it context, have a light starter, like garlic bread or even a vegetable soup (no, neither is very Greek, but the purpose of this post is not for you to simulate a Greek taverna entirely, it's for you to enjoy a good meal at home. Youvetsi is filling, so when I make it, I usually have it by itself). I always write that a green salad goes with things and usually it does, but I'm not convinced it goes well here.

Savour it - and then think of what you might get to taste on our tours of Greece. 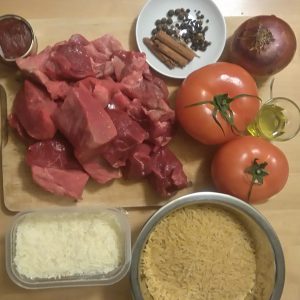 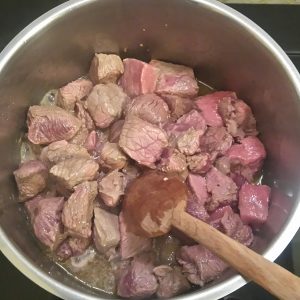 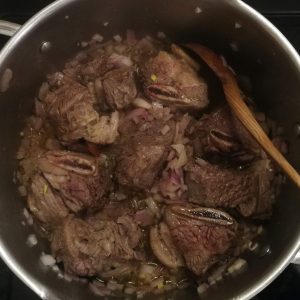 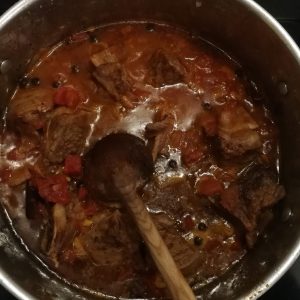 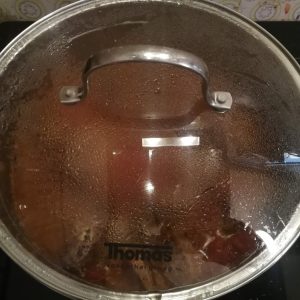 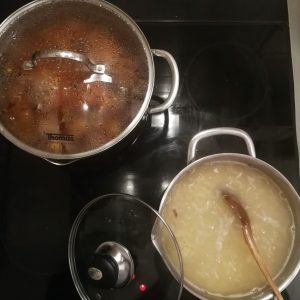 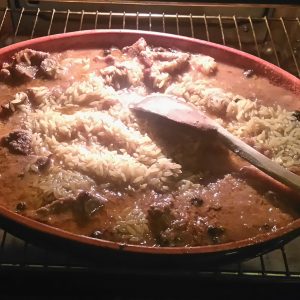 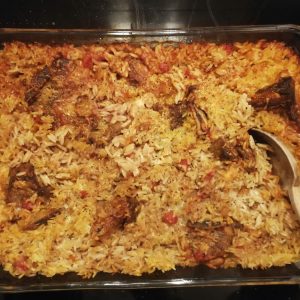 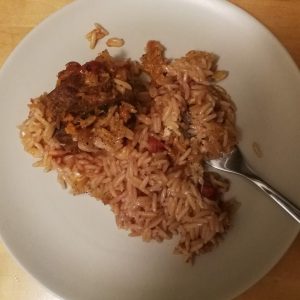