Off the beaten track: Arykanda in Lycia - a place of mystery and serenity

by Heinrich Hall on 28 June 2020 • 1 commentArchaeology/History, Off the beaten track, Turkey travel

A large Roman bath-and-gymnasium complex is one of the most impressive monuments at Arykanda, some of its walls preserved to the height of the vault.

What do you know about Arykanda (or Arycanda)? In all likelihood little or nothing: although the place is a fairly well-studied ancient settlement, having undergone nearly fifty years of excavations, it is hardly a household name. Certainly, those travelling in Lycia have a chance to come across it, and archaeologists interested in that region and its neighbouring ones are certainly aware of the site - but archaeologists working elsewhere and specialists in ancient history in general may never encounter its name during an entire career. Nothing of much importance to anyone not living there is reported ever to have happened at Arykanda.

This historical obscurity may be due mostly to Arykanda's remoteness, both in the past and the present. Although it appears to have been quite an affluent settlement for maybe half a millennium, straddling the last two centuries BC and the first three or so AD, it was probably never much more than a local centre, not one of the better-known ancient cities found closer to Lycia's coastline, places such as Xanthos, Myra or Patara. Of course, the history even of those places is fairly obscure, as is that of Lycia in its entirety, compared to the ancient hubs elsewhere in modern Turkey, which contains super-sites like Ephesus, Miletus, Pergamon, Aphrodisias and so many more.

Arykanda possesses a very fine Hellenistic stadium, from the third or second century BC. Only just over 100m (350ft) long, it is shorter than such structures usually were, perhaps due to the terrain, but its slopeward seating is very well preserved.

It is precisely this remoteness and relative obscurity that define the unique charm of Arykanda. Located about 25km (15mi) inland from the coast east of Demre (ancient Myra), the site sits on the steep side of a fairly narrow valley, and between 700m (2,300ft) and 820m (2,700ft) above sea level. It guards one of the few direct access routes from the Lycian shore to the uplands that make up most of Central Anatolia.

Surrounded by forested slopes and overlooking a peaceful landscape of small-scale agriculture, Arykanda is a place of great beauty and serenity. That's probably why it is sometimes called the 'Turkish Delphi', but the comparison is (to my mind) not a good one. It's true that both sites are in slope-side locations and consist of multiple terraces, but Delphi (in Central Greece) was a hugely important sanctuary supposedly self-chosen by one of the most powerful gods (Apollo), considered the centre of the world, and an oracle visited every four years for many centuries by thousands of people from all over the Greek, and later Roman, World. Arykanda was precisely the opposite, a much quieter place, doing its own thing locally, perhaps serenely, and not relying on projected glory or legend. If there is any truth to the Arykanda-Delphi comparison, which seems to be used in nearly every reference to the site, it resides not in any analysis, but simply in the fact that both places are extraordinarily beautiful. It will do.

Here's a satellite view of Arykanda, courtesy of Google. Zoom out to see the full extent of the site!

So, Arykanda is indeed beautiful.

What exactly is it? Located along one of the main north-south routes through the mountains of the area, and in a wider opening of the valley, it is a strategic spot of sorts, with access to some good land and lots of water. There is scant evidence of settlement since the Bronze Age, and the name with its -anda ending appears to be Lycian, meaning of the lost Indo-European language that we know to once have been spoken in the area. We don't quite understand when Arykanda became a town, though. Archaeological evidence would suggest the third century BC, as there is nothing earlier there that looks very urban. Considering that urbanism came late to Lycia, this is not too unusual.

The Upper Agora of Arykanda was the original core of the settlement, lined with shops and public buildings, including a bouleuterion or council chamber to the left of where the photographer stood, and the Temple of Helios, god of the sun, on the beautifully-constructed pedestal further back.

The original settlement at Arykanda appears to have been placed on a series of terraces, artificially-levelled areas made to provide space for buildings in this steep terrain. Most importantly, it has an agora, an assembly space with shops, shrines and public buildings, among them a bouleuterion (a council chamber for the body running the city) and several temples. This is the most defining feature of a Greek-style city, so its presence arguably makes Arykanda one. Other typically Greek features include a small but lovely stadium (possibly of the third century BC), and an extraordinarily fine theatre (maybe of the second or first century BC) - theatres appear to have been very popular/desirable structures for Lycian settlements of that era. Additionally, multiple inscriptions indicate that public life in Arykanda operated in Greek at the time. All of this indicates that Arykanda gained or created its urban identity during an era when the dominant cultural influence was Hellenisation, the process of Greek cultural habits being adopted by communities in southwestern Anatolia.

Arykanda's Greek-style theatre is one of the finest of its kind in the region, consisting of the well-preserved theatron (auditorium), the circular orchestra and the substantial foundations of the skene, the stage building. Like all such buildings, it served the production of dramas. It fitted an audience of over 3,000, which probably exceeds the population of Arykanda proper.

But then, the features that make Arykanda a typical ancient town are somewhat incomplete. There are no city walls, leaving the place undefended. The only potentially defensive feature is a sole watchtower at the highest point of the settled area, above the Upper Agora. Overall, in spite of possessing many of the key features (agora, theatre, stadium, council chamber, temples), Arykanda does not quite look like a Greek city, being unwalled and less compact than they usually are. Perhaps we should see it as a practical and local adaptation of the concept. This is not so unusual. Especially before the Romans took control of Anatolia, the ancient Lycians seem to have sometimes chosen a 'pick-and-mix' approach to Greek-style urbanism, equipping their settlements with some of the key identifiers - and thus functions - of a city, but not necessarily all of them. Maybe the place was initially really more like a formal centre for a community scattered in the area than an actual urban settlement.

A temple-type tomb of the Roman era near the large Roman baths.

There is more to see. The most typical Anatolian (more especially Lycian) element is a series of very large and ornately built tombs, temple-like in appearance and placed quite close to the core of the settlement. Most of them appear to be of Roman date, and their architectural elaboration uses Greek and Roman inspirations, rather than 'native' Lycian styles popular elsewhere in the area at the time - presumably a deliberate choice by those who built them. The tombs certainly indicate the considerable wealth of (at least some of) Arykanda's inhabitants.

Arykanda survived the Roman takeover of Lycia by many centuries, so we should not be surprised by the addition of some typical elements of a Roman town, such as bathhouses and at least one temple dedicated to a deified Roman Emperor (namely to Trajan), later on also Early Christian basilicas. That's all par for the course. It is worth noting, however, that the large Roman bath complex at the eastern edge of Arykanda (probably from the first and second centuries AD) is surprisingly monumental, another hint of great wealth.

The large Roman bath-and-gymnasium complex in the evening light.

Altogether, it's not yet possible to get to the bottom of exactly how Arykanda functioned. There was clearly wealth here, certainly from trade passing through along the important north-south connection it overlooked, but presumably also from something the area itself produced. What might it have been? The Arykanda Valley does not suggest immense agricultural potential, so maybe it grew some highly valuable crop, fruit or (medicinal) herb? Or did the Arykandans have some specialised skill or craft that was worth much to others? That's all possible, but the most likely option is probably wood from the region's lush forests, a key material for ancient ship-building. To this day, there are many tall cypress trees, perfect for making masts.

In archaeology, a bit of mystery is greatly stimulating, and Lycia has plenty of that to offer. Arykanda has something else beyond. It is, as we said, a place of a profound beauty and an intense serenity. It invites us to stroll around, discovering the different areas of the ancient settlement and the individual monuments within them, to take in the views across the theatre, the site and beyond, to rest and listen to the rustle of trees, taking in their scent and contemplating the people who once lived here. You can do all that on our Cruising the Lycian Shore itinerary. Our experts would love to show you around! 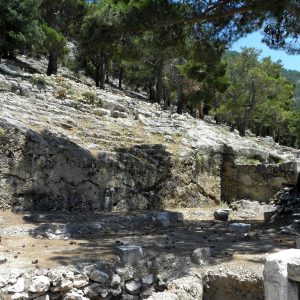 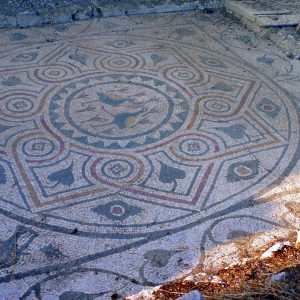 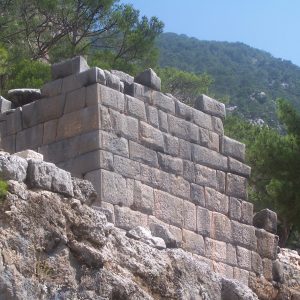 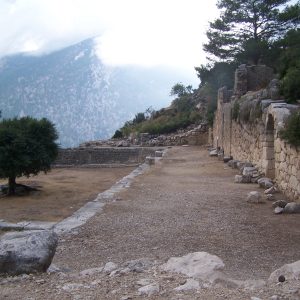 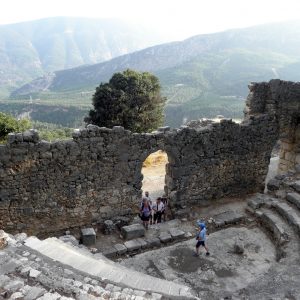 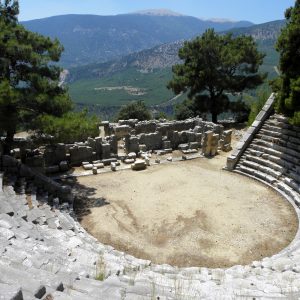 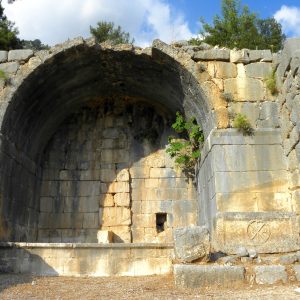 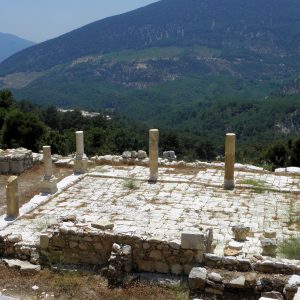 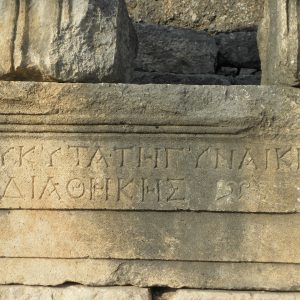 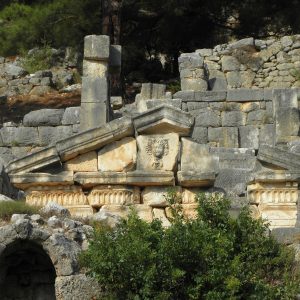 One response to “Off the beaten track: Arykanda in Lycia - a place of mystery and serenity”