The Perils of Online Site Reviews 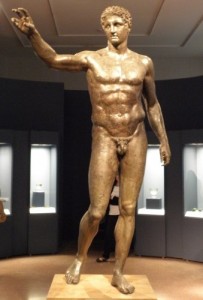 Boring? The 4th century BC Antikythera Youth, one of the finest ancient sculptures in the National Archaeological Museum at Athens.

What should you go to see on your Mediterranean holiday? It depends on whom you ask!

This blog, for example, serves a company specialised in cultural, especially archaeological, tours. Thus, it offers impressions of the sites, museums, landscapes, etc. we visit on our voyages, and which we know our guests to be interested in. And since we truly love our subject, we are usually full of praise for such places, whatever and wherever they be.

Only lately have I discovered a fascinatingly different way of looking at archaeological and historical sites or exhibits: poor online reviews!

During the last decade, online reviews have become a major influence on travellers. Provided by the travelling community, they are meant to give real and current advice and information on issues such as where to stay or where to eat. One website in particular has achieved virtually dominant status in this regard. I use it quite frequently myself.

What I was not aware of until recently is that it also offers its users the opportunity to review individual "attractions", which are then starred and ranked in the same way that accommodation or food options are. As should be expected, most of the great sites and sights on our itineraries end up with very high average marks. But my new hobby is reading the "poor" or "terrible" reviews of such places.

Put it down to interests that do not match ours, to poor preparation, lack of good guidance (!), or even just to the occasional visitor having a bad day, the results reveal a perspective that is so wildly different from our perception and that of our guests that it gains its own fascination, like an inverted-colours version of our approach to cultural heritage.

So, without further ado, here are my favourite bad reviews of some of our favourite places.

Some square walls - A detail from the extraordinary Roman Terrace Houses at Ephesus.

With a vast succession of hundreds of rooms, interior decorations, frescos, numerous mosaics,  and internal fittings such as kitchens and bathrooms, the 4000 square metre (43,000 sq ft) Terrace Houses at Ephesus are arguably the most vivid and best preserved example of Late Roman upper class domestic life that can be visited anywhere, and a treasury of art at the same time. Equipped with a large number of informative panels in English, they are among the most approachable parts of that extraordinary site. Well, not everybody agrees:

"Great for archaeology buffs, but average people will just pay more money to see some square walls and a few bits of mosaic."

Now, that is an understatement. There are over 75 fresco-painted rooms and around 100 floor mosaics, nearly all of them fully preserved, to see!

Nothing much to see - The White Tower of Thessaloniki.

The White Tower of Thessaloniki is the emblematic 15th century monument at the heart of the Northern Greek metropolis (for more detail on its significance, see Nota's remarks in the comments below). Besides the great views from the top, it contains a highly original and modern exhibit on the 2,300-year urban history of this great city. On each floor, it deals with a different aspect of Thessaloniki's past and present: its development through time, its monuments, its multicultural past, its long-standing role in trade and commerce, its arts, culture and entertainment, and finally, its culinary tradition. The displays are innovative and interactive, making the visit a uniquely informative and enjoyable experience. Or so I thought:

"You can climb on The White Tower (on stairs) to see the view of Thessaloniki. Besides that there is nothing special to see."

This slight oversight, missing no less than six floors of exhibits, may perhaps be a little surprising, but not as much as the next one....

We have written about the cathedral of Siracusa, ancient Syracuse on Sicily, quite recently on this blog. It is a most unusual and fascinating structure. Hidden behind its ornate baroque façade is a medieval church that incorporates the extensive and upstanding remains of the 5th century BC Greek Temple of Athena. That combination, together with the fact that it has continuously served as the city's main place of worship for over 2,400 years, makes it virtually unique - if you bother to see the interior.

"The Cathedral of Siracusa is hardly worth a trip, but nice to look at. We did not go inside."

This (translated from German) is an example of an especially mysterious type of review, written by someone who actually states that he/she did not visit the site in question. Such reviews are surprisingly common, especially for archaeological sites, but also for museums, churches and other monuments.

The great Basilica Cistern (Yerebatan Sarayı) in the heart of Istanbul was built in the 6th century AD as one of the main water supplies for the city of Constantinople. Its brick vaults supported by 336 marble columns, the cistern is not just an extraordinarily atmospheric place, but also a technical wonder, a masterpiece of ancient engineering. Covering an area of 9,800 square metres (105,000 sq ft) it had the capacity to hold 100,000 tons of water, reflecting just how populous and wealthy the capital of the Byzantine Empire must have been at the time! Besides, it is also famous as a location in the 1963 James Bond film From Russia with Love. Our guests tend to see the visit as one of the most memorable sights in Istanbul - unlike this remarkably grumpy reviewer:

"This place is dark, full of pillars and I think its a waste of time. I wouldn't recommend anyone to go there."

"Just the ruins of a town": A 2000-year-old city street lined by 2000-year old houses at Pompeii, the most fully preserved of all cities from antiquity.

Pompeii is vast. Recovered from the ashes of the AD 79 eruption of Mount Vesuvius that ended its existence and preserved it for posterity, the site is rightly famous as the only fully preserved Roman city, its streets, squares, homes, public buildings and places of worship preserved to an unparalleled extent. There is probably no ancient site in the world that is more directly approachable and comprehensible to the modern visitor, who can literally walk the same streets as its final inhabitants.Exciting? Not for everyone, it turns out:

"There is absolutely nothing of significance there, just the ruins of a town (...), no feeling of historic, art, or cultural significance. (...) No need to go."

And finally, my personal favourite:

The National Archaeological Museum in Athens (we have written about it here) is the world's largest repository of ancient Greek art. It contains an especially fine collection of sculpture, tracing its development from the 8th century BC to the ADs. Other highlights, ranging from prehistory to the Roman period, include the 3,600-year old wall paintings from Akrotiri on Santorini, the vast gold treasures from the Bronze Age tombs of Mycenae, a fascinating exhibit of ancient weaponry, and the wonderful material from the Antikythera shipwreck, not to mention the collections of painted vases, clay figurines, jewellery, and so on.  The museum merits not just one visit, but many. Or does it?

"(...) First WE ARE NOT MUSEUM PEOPLE at all so we were bored brainless. We stayed for 15 min and walked out. If you like history and museums then I'm sure you'll like this. You can take pictures there. If you are in Athens for only a few days don't waste your time but if you have time to kill I still wouldn't do it there. Use a nice café."

What have we learnt? Someone who does not enjoy museums in general also did not enjoy this one. Mind you, it is debatable whether any website would publish a restaurant review starting with the line "WE ARE NOT FOOD PEOPLE"...

So, do spare a thought for the hapless travellers we quoted here. For a better experience, with enthusiastic, lively and informative guiding by true experts, join us on one of our escorted tours in Europe: The Terrace Houses of Ephesus are a main feature of our Cruising to Ephesus tour, the White Tower can be explored on our Macedonia tour, Siracusa Cathedral is on our Exploring Sicily tour itinerary, the Basilica Cistern can be experienced on our Exploring Istanbul tour, Pompeii is - of course - a centrepiece of our Cruising the Amalfi Coast and the National Archaeological Museum is one of many highlights on our Exploring Athens tour...