by Heinrich Hall on 8 January 2018 • No comments
Croatia travel 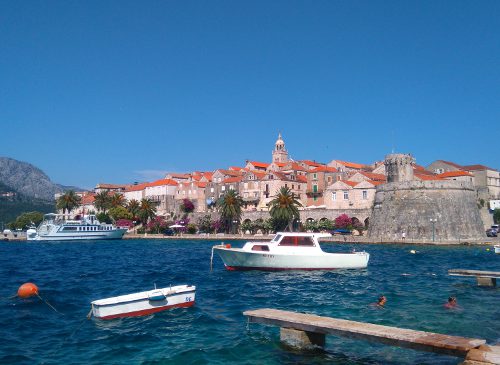 Korčula Town: one of the most beautiful sights in the Adriatic.

Happy New Year to everyone! As we reported on these pages some weeks ago, we are looking forward to our travel 2018 season. This year, we are offering an unprecedented number of archaeological and cultural tours and gulet cruises in six countries, plus a number of walking cruises and gastronomic trips. We are beginning our blog posts of the year by looking at mysteries! Starting today, we will present six mysteries, one mystery for each country we travel.

Mystery is a big word, and one that is often overused to sensationalise stories and places. In archaeology, it is often part of the more colourful and less systematic "fringe" discourse, the "Indiana Jones" image that is strung out beside the reality of what is actually a well-established and respectable academic field, using its own rigorous methodologies. Since all our guides and tour experts are trained archaeologists or historians, it is a word we don't tend to use much. That said, the past is full of things we do not (yet?) completely understand, full of small and large riddles, full of questions that remain open to informed speculation, questions that lead to more than one answer or -best of all - to answers that open up even more (and often better) questions.

On our tours and cruises, we naturally come across such questions every day and at every step. Some are simple ones, such as "how old is this?", "how was this object or building made?" or "what was it used for?", some are more complex, for example "whom does this statue or image depict?", "why did they choose this spot?" or "where did this come from?", and others again require a whole story for an answer: "who were these people?", "what happened to this place and its inhabitants?", "what does it mean?"... Our experts' task on all our trips is to is to highlight these questions where we should, to answer them when we can, and always to tell our guests the stories they raise.

We have great stories to tell you, about whole civilisations, about regions, about landscapes, about sites, about specific buildings and about individual artefacts in the museums we visit. Often, these stories are answers to the questions above. Sometimes, they are explanations of why there is no easy answer.

Today, we give you the first of six examples of open questions on our tours: in other words, mysteries.

Mystery 1. Croatia: Where is the Greek settlement of Korkyra Melaina?

Superb: Korčula Town, a gem of the Adriatic.

Korčula is one of the larger islands of southern Dalmatia. It is a beautiful and verdant place, distinguished by a wonderfully atmospheric medieval capital town, and its history of human activity goes back tens of thousands of years, as indicated by important excavations in the Vela Spila Cave in the west of the island. Korčula also appears to play a role in the Greek colonisation of the Adriatic islands. Its Greek name, Korkyra Melaina, is quite well-attested in the literature. It means "Black Korkyra", Korkyra being the ancient name of modern Kerkyra or Corfu, the northernmost Greek Island in the Adriatic. Intriguingly, various ancinent Greek geographers, such as Strabo, refer to Korkyra Melaina having been settled by the city-state of Knidos - extremely far away in the eastern Aegean. The period when Knidos was in a position to found colonies is the 6th century BC. That would make Korkyra Melaina the earliest Greek colony in Dalmatia by two centuries. Likely story? No mystery yet...

The Lumbarda Psephisma, in the Archaeological Museum of Zagreb.

Even more intriguingly, in the 19th century an important inscription was discovered, in fragments, at Lumbarda, a fertile area near Korčula Town. It is a Psephisma, a document recording the allocation of land plots to Greek settlers for a new colony, and it is clearly from the 3rd or 2nd century BC. It names individuals, with Greek family names (most likely from Issa/Vis, otherwise Sicilian Greeks), as people given land and the right to live in a walled city, a typical set-up for a new colony. Ideally, that should mean there were two separate Greek settlements in the island, one from the 6th century, one from centuries later.

So what is the archaeological evidence for this earlier and later Greek presence on the island? It is nil, nothing, nada, rien, nichts, in Croatian: ništa. That's our mystery!

We have good evidence for the colonisation of Issa (modern Vis, the next island to the west) in the early 4th century BC, appropriated by settlers from Syracuse in Sicily, and that of Pharos (Hvar, the next island to the north) a  generation or so later in the same context, and of a few subsequent colonies in the Dalmatian mainland. On Vis and Hvar, Greek settlement is well attested archaeologically, by walls, tombs, house foundations and other monuments, including a theatre on Vis and the stunning field system of Starigrad Plain on Hvar, where modern farmers still use a land division set out 2,400 years ago.

On Korčula, archaeologists have discovered no such thing. They have found settlements and burial mounds of the local Dalmatian/Illyrian tribes, sometimes yielding Greek pottery, presumably used as exotic status objects, but there is no trace of a Greek settlement of the 6th or 5th or 4th or 3rd century BC. Even at Lumbarda, where the famous inscription turned up, the first non-local elements archaeology sees are Roman, centuries later.

This is an ongoing archaeological and historical problem. Are the references to the 6th century just fiction, propaganda or misunderstanding or did an early attempt of colonisation take place? Did settlers arrive and somehow fail? Were they repelled by local tribesmen? There is historic evidence for conflict between Greeks and locals elsewhere in the area. The same questions arise for the 3rd/2nd century document: did it happen - who are the people allocated plots of land and why can we not see anything of their presence? In Vis and Hvar, Greek settlement is clearly visible through archaeological remains, so what happened on Korčula? Local archaeologists disagree on the issue: either there is an undiscovered Greek settlement (or two?) somewhere in the island, or all attempts at colonisation failed and the historical record and the inscription just express an intention to settle Korčula. So, there we are. Either, we have an open mystery, or we have a simple story of words not matching facts...

You can explore Korčula Town on our Cruising the Dalmatian Coast: from Split to Dubrovnik and vice versa and on various others of our gulet cruises in Croatia. We'll show you a copy of the 3rd or 2nd century BC Lumbarda inscription in the local museum. But let's face it: we still don't know what to make of Korkyra Melaina. There are archaeologists working on the island as we are speaking: let's see what they find...

This is just one mystery we encounter. For more, have a look at: