This gulet cruise is a combined itinerary, introducing our guests to the sights of the Turkish coast and the adjacent Greek Isles within the same tour.

Throughout the region’s long history, the sea has not only provided a geographic separation, but also a dense web of cultural links between the settlements along its shores, island or mainland. From the Doric Greeks who settled the area three millennia ago, founding a series of vibrant cities, via the Romans and Byzantines to the short-lived empire of the Crusader Knights of St John and beyond, fascinating remains of past glories await the visitor at every corner.

Not only does the cruise throw light on the different peoples that have dwelt in the region or passed through it throughout time, and on the various eras when they did so; it also highlights many different aspects of human life and human achievement. Peaceful and open coastal villages look across the water at sternly defensible walled cities or citadels; remote mountain villages perched high above the rugged coastline overlook the same seas that harbour extravagant trading centres, once hustling and bustling with commercial life; places of austere and dignified monastic spirituality alternate with wealthy homes featuring luxurious facilities and sensual decorations.

Likewise, the trip highlights many contrasts in the terrain, the nature itself of the area we travel. Layers of sedimentary limestone dominate some coasts and islands, while others are entirely volcanic, comprising jagged lava and ashy pumice. Bare rocky slopes, resulting from millennia of browsing sheep and goats, are a typical sight, but so are dense pine forests and well-watered plains; rugged wilderness prevails in the pastoral uplands, while carefully constructed and terraced agricultural landscapes sit far below them…

On this cruise, we will visit the great island of Kos (part of the Dodecanese), its island capital a veritable patchwork of ancient and modern, overlooked by the serene healing shrine of Asklepios. We continue to the tiny island of Nisyros with its labyrinthine harbour village and its stupendous volcanic caldera and then to verdant and peaceful Tilos. On Symi, we get to see one of the Mediterranean’s most picturesque ports. Returning to Turkey, we explore Knidos, one of the greatest cities of the ancient Aegean, set on a long peninsula and virtually surrounded by Greek islands, before finishing at Bodrum, ancient Halicarnassus, erstwhile capital of Caria, with the remains of the great Mausoleum and the enormous crusader castle.

Join us for this unique experience combining two countries, one fascinating history and a whole series of beautiful landscapes and seascapes!

Departure from Bodrum Harbour (approx. 40 mins from Bodrum Airport) is planned for approx.17:00 in order that the gulet can clear customs and enter Greek waters. Embarkation is from 15:30 onwards. You are more than welcome to arrive earlier to drop off your bags, but please be aware that the crew will be busy cleaning and tidying making everything ready for your group so you will not be able to settle into your cabin.

If your travel plans or flights do not allow you to arrive before 17:00 we recommend arriving in Bodrum the day before the tour starts. This would also allow time to relax, recover from any jet lag and arrive at the boat on time for embarkation and departure.

If you arrive to the gulet after 17:00, we will do our best to enable you to join the tour at a later time and place.

Please Note: Departure time is subject to change depending on weather, harbour or other conditions.

Disembarkation is around 09:00. We will arrange local transfers on the first and last day of the tour.

Booking Flights: If you are staying in or connecting via Istanbul then the easiest way to get to and from the gulet is to fly. There are a number of airlines that offer domestic flights in Turkey. The cheapest way to book flights is directly with the airline online.

Visas A Visa is required to pass through Turkish customs during the cruise. Visas are easily obtained online at eVisa and must be purchased before you travel. From 2 March 2020, British nationals travelling to Turkey for tourist or business purposes will no longer need a visa for visits of up to 90 days in any 180-day period.

Citizens of European Union or Schengen Treaty member states need no visa for Greece, those from the United States, Canada and Australia do not need to apply for a visa to visit Greece for trips of less than 90 days duration.

Athens, Kos and the Greek islands If you are planning to stay in Athens before or after your tour or if you intend to add time on Kos or any other Greek island, we are happy to offer information and advice. 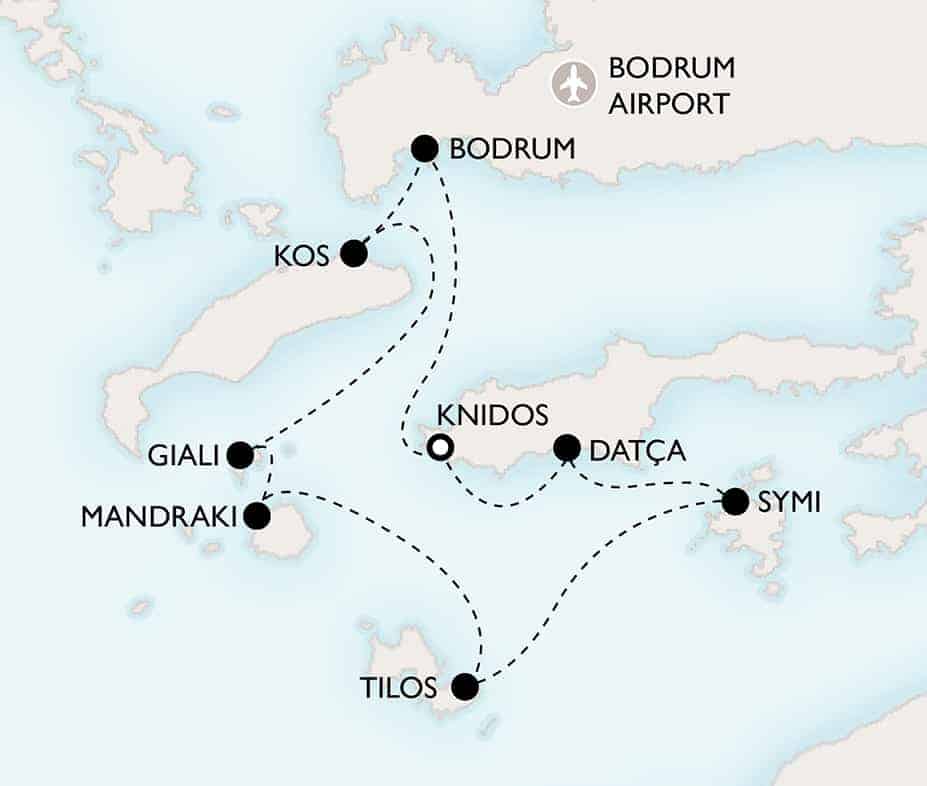 If you want a perfect holiday experience in Greece, choose the Peter Sommer Travels' Cruising to the Cyclades tour. The food and accommodations on the gulet are wonderful. The itinerary and sites visited on the Islands are well thought out for interest and variety. And, the guides offer an amazing glimpse of ancient Greece. They are able to narrow down what is of major importance/interest at each site. Add relaxing on the gulet and it adds up to an amazing vacation.

This was a superb tour... beautifully crafted, taking us through the long history of the island and travelling from the arid East to the green West. The accommodation was wonderful and the food/wine experiences truly memorable. Heinrich is not only a fount of knowledge but a wonderful host and has a great sense of humour. Heinrich and Vangelis (the local guide) both went to great lengths to provide us with experiences much beyond expectations and I cannot thank them enough.