One of ’Greece’s top three cultural holidays’ – The Telegraph (2014)

This spectacular gulet cruise, starting in Bodrum and ending in Marmaris, takes you through the entire Dodecanese chain, beginning with the famous island of Kos and including eleven of the most beautiful and evocative of the Greek islands and no less than three UNESCO-listed World Heritage sites.

The islands’ strategic location, between the open Aegean and the mainland of Asia Minor, has made them a well-connected cultural interface throughout history. Carians, Greeks, Romans, Byzantines, Venetians, the Crusader Knights of St. John, Ottomans and Italians visited or settled them, leaving behind a rich legacy of grandiose ancient sanctuaries, mighty castles, serene monasteries and traditional villages, all set within an ever-changing maritime scenery.

The sites you see on this itinerary include world-famous relics, like the Asklepieion of Kos, the extraordinary archaeological museum of Samos, or the medieval fortifications of Rhodes, each among the best of their kind. On the smaller, off-the-beaten-track islands you gain a more intimate view of traditional Greek island life, with their picturesque harbours, village squares adorned with pebble mosaics, and beautiful domestic architecture. These islands are also rich in diverse landscapes: craggy hilltops, strange volcanic formations, and of course coastlines featuring a succession of bays and islets. Another highlight of the cruise is the series of you will meals enjoy at selected venues throughout the islands, ranging from home cooked local cuisine in family-run tavernas to real gourmet food, the finest the region has to offer.

Sightseeing aside, your stylish gulet will moor in secluded coves, allowing you to bathe in azure seas, admire the pristine scenery, or simply relax. From fabulous food to epic history, this is a fascinating journey through Greek culture, past and present. Don’t miss it!

Departure from Bodrum Harbour (approx. 40 mins from Bodrum Airport) is planned for approx.17:00 in order that the gulet can clear customs and enter Greek waters. Embarkation is from 15:30 onwards. You are more than welcome to arrive earlier to drop off your bags, but please be aware that the crew will be busy cleaning and tidying making everything ready for your group so you will not be able to settle into your cabin.

If your travel plans or flights do not allow you to arrive before 17:00 we recommend arriving in Bodrum the day before the tour starts. This would also allow time to relax, recover from any jet lag and arrive at the boat on time for embarkation and departure.

If you arrive to the gulet after 17:00, we will do our best to enable you to join the tour at a later time and place.

Please Note: Departure time is subject to change depending on weather, harbour or other conditions.

Disembarkation in Marmaris (approx. 1 hour 20 mins from Dalaman Airport) is around 09:00. We will arrange local transfers on the first and last day of the tour.

Booking Flights If you are staying in or connecting via Istanbul then the easiest way to get to and from the gulet is to fly. There are a number of airlines that offer domestic flights in Turkey. The cheapest way to book flights is directly with the airline online.

Visas A Visa is required to pass through Turkish customs during the cruise. Visas are easily obtained online at eVisa and must be purchased before you travel. From 2 March 2020, British nationals travelling to Turkey for tourist or business purposes will no longer need a visa for visits of up to 90 days in any 180-day period.

Citizens of European Union or Schengen Treaty member states need no visa for Greece, those from the United States, Canada and Australia do not need to apply for a visa to visit Greece for trips of less than 90 days duration.

Athens, Kos and the Greek islands If you are planning to stay in Athens before or after your tour or if you intend to add time on Kos or any other Greek island, we are happy to offer information and advice.

Nature of the Cruising the Dodecanese itinerary Cruising and Itinerary: This fabulous cruise through the Aegean, visits 11 of the Dodecanese Islands and has a character very different to that of most of our other gulet cruises. We will be crossing some stretches of wide open sea between the islands and covering considerable distances on some of the days. The Dodecanese Islands (running as a chain alongside the shore of southwest Turkey) are renowned for their wealth of nature and beauty and cruising between them offers a wonderful opportunity to experience and appreciate their fascinating diversity. There will be some early starts so we can make passage in the early morning before the wind picks up in the afternoon. While the average travelling time will be longer than our normal coastal gulet cruises, there will be opportunities to swim each day (schedule and weather permitting).

As with all of our gulet cruises, we have spent a great deal of time crafting the itinerary to be as good as it can be, but we are travelling aboard a boat and may need to make changes according to the weather and the captain’s advice.

Overnights: Compared with our coastal gulet cruises in Turkey and Italy, where we tend to spend a good number of nights moored out in isolated bays, on this trip we will be spending more nights in harbour on the islands. This means you’ll have the chance to explore not only as part of the expert led outings, you’ll also be able to go ashore and wander in the mornings and evenings when we are tied up in the picturesque Greek harbour towns.

Food: The boat is a Turkish gulet with a Turkish crew including a chef who will be cooking up wonderful meals throughout your cruise. As such the food served on board will be traditional ‘Turkish’ or Eastern Mediterranean. We will be going ashore to eat authentic Greek food in family run tavernas at intervals along the way and your tour leader will ensure you’ll have the chance to sample a good many of the local Greek delicacies of the islands. The gulet will be stocked with Greek wine and spirits and your guide, Heinrich, something of a Greek wine connoisseur, will introduce you to some of the best beverages (alcoholic and non-alcoholic) the Greek islands have to offer. 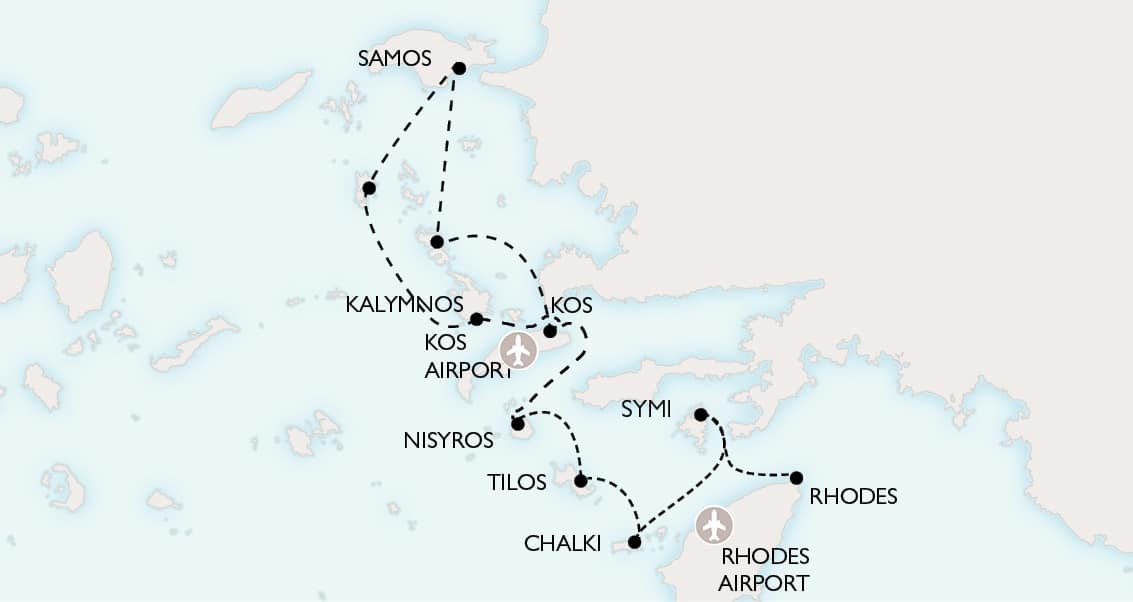 Peter Sommer runs a a highly professional organization. From his brochure to drop off at the airport to fly home his attention to detail and his consideration for his clients is superb. The archaeologists he uses as guides are erudite but highly personable and have an ability to turn a pile of stones into a recreation of the lives of the people who lived there over two millennia ago. Excellent.

My first experience with Peter Sommer Travels exceeded my expectations and I wouldn't hesitate to travel with them again. The tour was varied and interesting, the food was excellent and the guides were warm and extremely knowledgeable. Every effort was made to accommodate peoples' differing needs. Excellent.