A glorious archaeological and cultural tour of Athens. Led by two archaeologists and connoisseurs of the city, you’ll explore the ancient city and its superb archaeological museums, embarking upon a fascinating journey spanning more than 3,000 years. From the warlike Mycenaeans of the Bronze Age, through the glories of ancient Greece and Rome, and on via the Byzantine, Frankish and Ottoman Ages to the vibrant modern capital, you’ll investigate the city as well as its beautiful rural and maritime surroundings. Alongside famed highlights like the Acropolis and Agora (the ancient marketplace), on our Athens tour you’ll see many well-kept secrets, such as the fortified ancient country town of Rhamnous, the beauties of Attic Byzantine architecture and the “city under the city”.

Athens has a unique place in the history of Western Civilisation – it defines our image of ancient Greece. The city’s sacred rock, the Acropolis, crowned by some of antiquity’s most famous buildings, counts among the most recognisable emblems of human achievement. Its central focus, the enormous Parthenon, temple of the virgin goddess Athena, reflects the ups and downs of Athens’ rich history: abraded by time, hacked at by iconoclasts, wounded by explosives, denuded of its sculptural decoration, built and rebuilt, it still stands proud as the symbol of its city and country.

Athens’ golden age was the Classical era of the 5th century BC, when within little more than a hundred years, it faced down the might of imperial Persia and created an empire, fuelled by a new experiment in organising people: democracy. In a few short decades, a torrent of ideas spilled from the city’s minds, creating or advancing philosophy, tragedy, comedy, history, art and architecture. Immortal names, such as Socrates and Plato, Aeschylus, Sophocles, Herodotus and Thucydides peopled the city.

However, Athenian history is not limited to those few generations: the city’s origins go back to the Bronze Age and its legacy continues to the present day.

An unforgettable week of exploring, understanding and enjoying ancient and modern Athens which will delight all the senses.

Day 1: Arrival in Athens. Transfer from airport, about 40 minutes away, to our hotel in the centre of the city. Welcome dinner.

Day 2: Mt Lycabettus wrests itself free of the encroaching city which laps at its base; the views from its summit are stunning and will give you a feeling for the whole city. Next we visit the Agora, the political heart of democratic Athens with its wealth of remains from Classical, Hellenistic and Roman times. In the afternoon, we explore the peaceful Kerameikos, the ancient city’s most important cemetery for over a thousand years, and set just outside the city walls.

Day 3: Northern and western Attica. First, to Marathon with its great mound for the heroic dead, the saviours of Athens in 490 BC. Then on to the beautiful fortified country town of Rhamnous, and the great shrine of Demeter at Eleusis, where initiates sought answers to life’s greatest questions as part of antiquity’s most famous mystery cult.

Day 4: A day in the city begins with the Theatre of Dionysus, on the site where Aeschylus, Sophocles, Euripides and Aristophanes gave their plays to the city. We then follow the peripatos, the ancient track around the Acropolis, before climbing the sacred rock to view the city’s most renowned artistic and architectural achievements. Passing through the great gateway of the Propylaea, we will see the fabled temples of Periclean Athens – Athena Nike nestling on the rock’s shoulder, the Erechtheion with its patient caryatids and the incomparable Parthenon. In the afternoon, a visit to the New Acropolis Museum , where you can see some of the finest ancient treasures a mere stone’s throw from where they were found.

Day 5: The history of Athens is tied to the sea so we head out on the glittering Saronic Gulf to the island of Aigina, an early bitter rival of Athens which Pericles called ‘the eyesore of the Piraeus’, in spite of its great beauty. Aigina town is a pretty nineteenth-century harbour town, its history stretching as far back as the Bronze Age, which we explore at nearby Cape Kolonna. Further east, we visit the exceptionally well-preserved and beautifully set temple of Artemis Aphaia.

Day 6: The morning is devoted to the superlative National Archaeological Museum, home to the most iconic treasures of ancient Greek civilisation, to which no mere list can do justice. Free afternoon to relax or explore by yourself.

Day 7: In the morning, we walk through Plaka, the Old Town of Athens, to view its Roman, Hellenistic and Byzantine remains rubbing shoulders with Ottoman mansions and Neoclassical houses. Traversing the heart of the planned 19th century city and its political centre in Syntagma Square, we spend the afternoon enjoying the superb Byzantine Museum with its fascinating collection of Greek art, artefacts and icons, illustrating the city’s important and fascinating history during an era neglected by most tours of Athens.

Day 8: Transfers for Athens airport, about 40 minutes away.

Arrival and Departure Information for our Exploring Athens tour

Booking Flights The cheapest way to book flights for our Exploring Athens tour is directly with the airline online.

Citizens of European Union member states, the United States, Canada and Australia do not need to apply for a visa to visit Greece for trips of less than 90 days duration.

Athens If you are planning to stay in Athens before or after your tour we have included below links to more information and things to see and do. 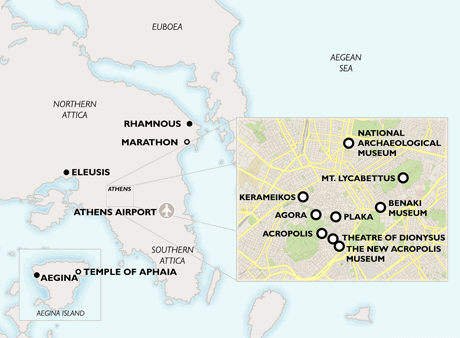 My experience, a week-long tour of Athens, was superb. We saw not only the usual tourist sites, but several that were certainly off the beaten track. The visits to the National Archaeological Museum and the Acropolis Museum, as well as several smaller ones, were fascinating. Museums can be overwhelming, but our guides pointed out the most significant items and explained their context and meaning. The organization of the tour and the accommodations were excellent and the meals, superb. Our 2 guides, both archaeologists, were enormously knowledgeable, did a wonderful job of sharing their knowledge, and were charming companions, as well.

It was a great learning experience, guided by expert archaeologists.