This cultural tour and gulet cruise in Turkey explores a magnificent stretch of coastline behind which developed an extraordinary culture and a fiercely independent people – the Lycians.

Travelling aboard a beautiful Turkish gulet there are plenty of opportunities to swim in the crystal waters of the turquoise coast. Mooring in secluded bays, we set out on foot to walk on paths lined with wild herbs, or stroll through olive groves strewn with rock cut tombs.

Once a day we visit one of the ancient cities that adorn this timeless coast. Highlights include Xanthos, the great capital of ancient Lycia, whose great treasures caused an extraordinary stir when they were brought to the British Museum; and Gemiler, where a small town clings to the slopes of a rocky island. It blossomed for just a couple of centuries in Byzantine times, decked out with houses and resplendent with a processional way and five churches.

We also have the opportunity to see Patara where archaeologists are uncovering a massive and monumental site, birthplace of St. Nicholas (Santa Claus), besieged by Brutus (the murderer of Julius Caesar) and visited by St. Paul.

Day 1: Our gulet is 30 minutes from Dalaman airport, at the charming marina village of Göcek, overlooked by the steep mountains at the head of the Bay of Fethiye, on Turkey’s Mediterranean coast. From its sparkling ultramarine waters, we’ll look out at a story-book bay filled with islands, and enjoy our welcome dinner on board.
Day 2: The journey out of the bay is a thing of beauty in itself, and about the prettiest curtain raiser we could wish for. We take the route east, like venturesome sailors for millennia, though we’re seeking different reaches. We come to the island of Gemiler. Close to shore it provides protection for boats within a myriad of inlets, coves and anchorages, all framed by green wooded hills and studded with islets that look like droplets in the shimmer from their heights. On the island’s shoulders we see tiers of ruins, the first of a complex of early Byzantine churches that clamber up the spine of the island to a peak with stunning views. This pilgrimage centre to St Nicholas has a history that spans the end of the ancient world and the beginning of the mediaeval, ending when the seas brought dangers from afar. Now the water is perfect for swimming and snorkelling.
Day 3: We cruise on to Kaş, a beautiful harbour town of white-washed houses covered with purple bougainvillea. Deep green hills and rounded islands are matched as if by an artist against an underlying bedrock that reddens beautifully in the afternoon light. The ancient city, Antiphellos, is threaded through the modern town: Lycian sarcophagi can be found within the streets, and rock-cut tombs dot the hillsides. Past its terracotta-coloured Greek temple, we come to a gleaming theatre on a rise with a magnificent sea view, the arms of the surrounding bay stretching out to each other to offer the spectator a natural lyrical masterpiece.
Day 4: Our course takes us east to the picturesque village of Üçağız, another of the havens that ancient sailors relied on so heavily on the Lycian coast. A little place of rough stones, it lies on top of ancient Teimiussa, which here and there reveals itself – a fine Roman doorway here, a Lycian sarcophagus amid a riot of flowerpots there. As the lanes peter out, ancient walls stand amid the scrub near one of the most evocative Lycian burial sites: threaded along the shore, an absolute forest of tombs, some with their ancient Greek inscriptions to memorialise their long-gone owners. Then to nearby Kale, something of a fantasy destination where perched above a jumble of Lycian sarcophagi lies a crusader and Ottoman castle crowning the hill with its distinctive crenellations. One of the most romantic settings of the holiday.
Day 5: We set off west for Kalkan, to be found in the dictionary under ‘beautiful’, an archetype for a pretty beach coast. Then it’s inland, up a famously fertile valley to the great ancient city of Xanthos, the centrepoint of ancient Lycia, from which powerful lords dominated the region, and in whose famous and picturesque tombs they found their rest. One of antiquity’s most notable sites, attacked in turn by Persians and Brutus, the slayer of Caesar, its importance is reflected in the scale and impressiveness of the remains, with more still being revealed by archaeologists. The vast theatre, expansive Roman structures and the great Xanthian Obelisk, with its long inscription in the characteristic angular, half-recognisable alphabet of the Lycians make this a real highlight.
Day 6: We head to Patara, birthplace of St. Nicholas (Father Christmas) and a major naval and trading port of ancient Lycia, making it a waystation for saints Paul and Luke on their travels. Once again we come to a sprawling and outstanding complex of remains scattered over a wide area, its pretensions announced by a formidably impressive monumental arch dedicated to a Roman governor. Within are extensive and well-preserved remains, brought out of the sand-dunes by excavation, from the massive platform of a pharos-lighthouse (the oldest standing) to the column-lined arcaded streets to its historically most important gem. This is the imposing parliament building of the Lycian League, still standing in serene and imposing grandeur, once capital of a federal state of Lycia whose constitution was a formative influence on that of the United States.
Day 7: A last dip before cruising into Fethiye’s welcoming embrace. But we’re not yet finished: we make a visit to the rock-cut tombs of ancient Telmessus, the greatest of them with huge temple-facades, all rising in tier upon tier up the massive russet cliff-face. A magnificent, piercingly memorable final site before we descend for a last chance to shop and wander before our final meal together. A rousing finale for this inspirational Turkish odyssey.
Day 8: Transfer from our gulet back to Dalaman airport. 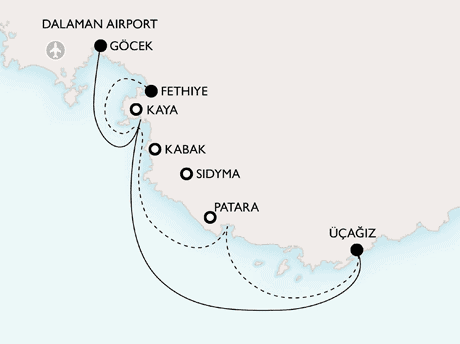 From start to finish this was a fabulous experience- the scenery was breathtaking, the intellectual stimulation and greater appreciation for Turkey's history was exciting and the food-oh how we looked forward to each meal! The pace was perfect with hikes, swimming , exploring little ports, one lunch and one dinner off the boat, and 2 lovely sails. Thank you Peter for planning such a great travel experience.

I enjoyed the whole ambience of the gulet tour, thoroughly relaxing. The cruising was beautiful, as was the scenery. The historical sites were fascinating.