IrelandExploring Ireland: The Heart of The Emerald Isle

“The Emerald Isle”, “the Island of Saints and Scholars”, “the Home of the Rainbow” – so many clichés have been used to describe Ireland, all of them based on some element of truth and none of them sufficient to capture the enormous fascination of this most unusual island. At Peter Sommer Travels, we are excited to present Exploring Ireland: The Heart of the Emerald Isle, our first tour in a country that is spectacularly rich in beauty, in history, in character, in hospitality and – most of all – in stories.

In the Irish countryside, layers of history are often situated not – as one would expect – one above the other, or one superseding the other, but side-by-side. A Neolithic tomb may share a field with a Celtic fort, remnants of an Early Christian monastery may stand in the grounds of an 18th century “Great House”, a medieval Round Tower may overlook a traditional fishing village. Each monument with its own legends, stories or myths attached to it, but all are embedded in the peaceful beauty of the Irish landscape and its many shades of green. Likewise, Ireland’s towns and cities and their architectural and cultural heritage reflect the turbulent history of a country that has contributed so much to this world’s music and literature and to our shared human imagination.

Exploring Ireland is a unique tour, created on the basis of an intimate acquaintance with the country and a passionate love for it, gained through many years of living and travelling there. Designed to present a rich and insightful panorama of Ireland’s heritage, tradition and culture, it takes in some of the famous “must-see” sights, such as the Megalithic tombs of Newgrange and Knowth, the stupendous “Celtic” cliffside fort at Dun Aonghasa in the Aran Islands, the great monastic centre of Clonmacnoise, the pristine Norman castle at Trim and, of course, the dazzling heart of Dublin with its excellent museums. These are matched and complemented by places more “off-the-beaten-track”: stone-carved crosses, windswept tower houses, mysterious “royal” sites of Gaelic mythology, plus a never-ending array of extraordinary scenery, ranging from the heart-achingly lovely to the stark, lonely and wild.

Another central aspect of the tour is the range of carefully-selected hotels, among them renovated castles, manors and town houses. Each of them evokes the country’s history and exemplifies the remarkable Irish hospitality. We of course encounter the latter day by day on meeting the astonishingly friendly and communicative locals who make Ireland such a pleasant and unforgettable place to visit, a place brimming over with words, stories and songs. The experience will be rounded off by enjoying the many fine qualities of Irish gastronomy, including some of Europe’s best seafood and meats, as well as local cheeses and the island’s famous beers and whiskeys. The surprising originality and excellent craftsmanship of modern Irish cooking are an attraction in themselves.

Exploring Ireland aims to offer the perfect introduction for travellers newly discovering the country, but also a new and deep insight for those already in love with Ireland. Our guide, deeply familiar with Ireland, can’t wait to share his knowledge and love of the country with you.

Our transfer vehicle will collect from Dublin International Airport at 17.00, should you wish your arrival at your hotel to be organised by us. If you prefer to arrange your own arrival, check in time is set for 14.30.

Booking Flights The cheapest way to book flights is directly with the airline online.

Visas If you are not from an EEA country you must have a valid passport to enter Ireland. It must be valid for the whole of your stay. You may also need a visa, depending on which country you are from. You can check if you need a visa by using the link below.

Custom Tours If you are thinking of extending your trip to Ireland, please contact our office for advice and suggestions for bespoke travel plans. 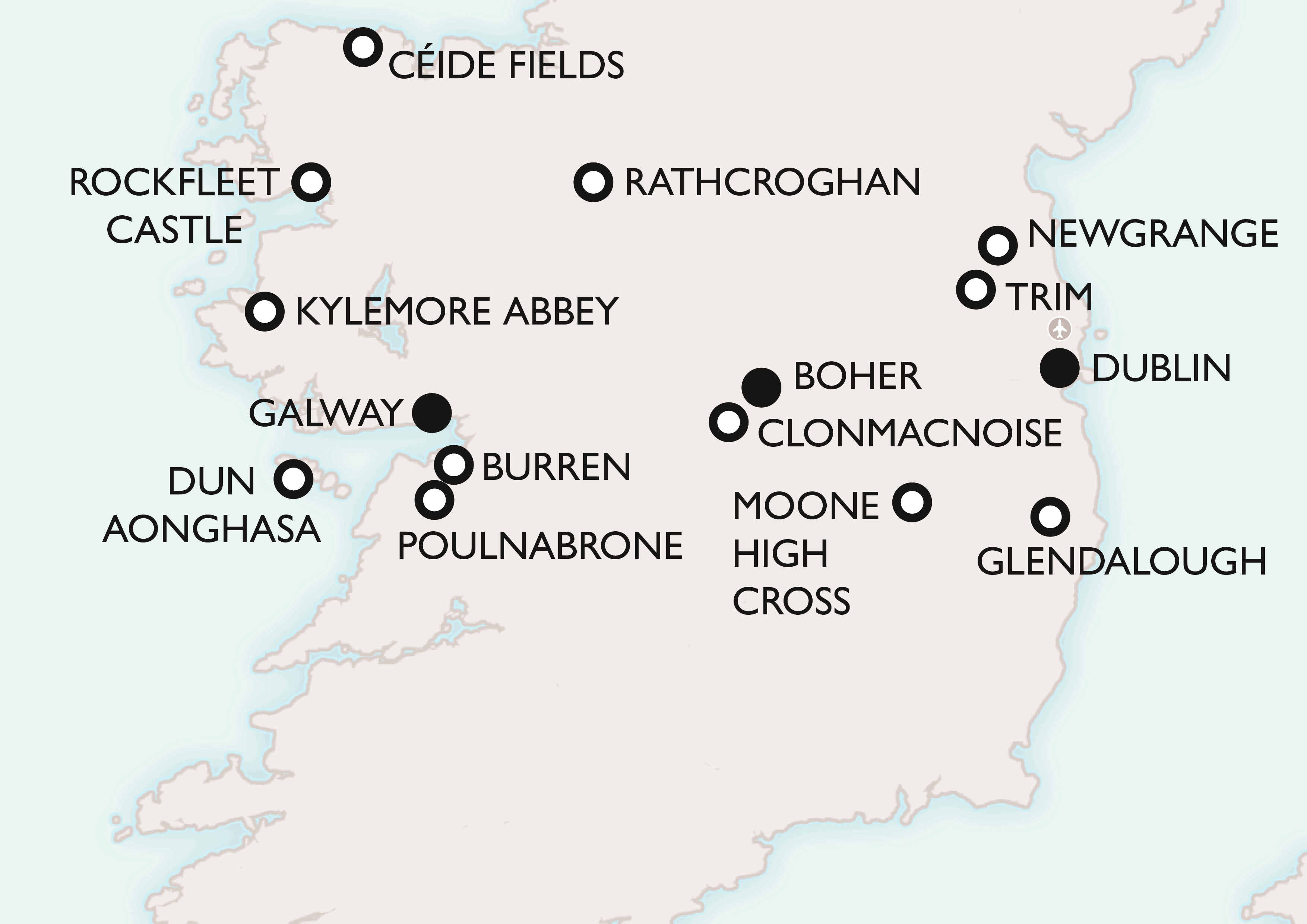 This was our fifth tour with Peter Sommer Travels and each has been a completely successful, thoroughly enjoyable experience.

Our first visit to Ireland. We chose Peter Sommer Travels as our tour operator given previous experiences with them. The tour itinerary had been thoroughly researched prior to commencement, the hotels extremely comfortable, mostly country houses and the restaurants, whether in the hotels or stand alone, offering a range of fares, from haute cuisine to country kitchen, all worthy of a return visit and high recommendation. The coach was immaculate and superbly comfortable. The two guides Siobhan and Heinrich , both academics, are superbly versed in their subjects and able to impart their knowledge to their audience in a manner which maintained interest and was suitably peppered with humour. They also hosted the group in an exemplary manner at the dinner table and structured the daily itineraries to afford the guests personal space and comfort.