Join us on an exploration of the raw beauty and richly-layered history of this most distinctive English region. Few areas so large come to be defined by a single work of man, but the Wall Country has had a special character since the Romans first set this great work in trail over field, hill, crag and river nearly two thousand years ago. Today, we take you through a warm and welcoming countryside of ever-changing views, from bustling mediaeval market towns, through gentle farmland and craggy rocks strewn with tumbled Roman stones which give way to beautiful views of thick woods and wild loughs. This is a tour where the landscape itself inspires awe and is a character in its own right. It has drawn people from Romans through Anglo-Saxons and Vikings to mediaeval warlords, sinister Reivers and the Victorian romantics who fell in love with it and its stories.

Our encounter with the long history of this region begins as the Romans, after forty years in the north, built their mighty Wall, marching mile after mile across the neck of Britain, disregarding hills, rocks and rivers and definitively marked the land to the south as Roman. Though there is much to see and say about the military side of the wall – the physical awe, the impressiveness of Roman military power and organisation – there is also another more human tale to tell. Everywhere behind the wall, there are stories of strange gods, civilian bustle, military order and the daily lives of thousands of men, women and children. It is a Roman landscape unique in Britain for its diversity and scale.

With the end of Roman rule after some three hundred years, the ruins of the Wall became the homes of farmers, strongholds of lords, hide-outs of thieves and the building material of churchmen, but always remained a powerful reminder of what had once been. Our story continues with the Anglo-Saxons and then the stretching north of the great kingdom of England, marking the landscape with beautiful churches and gripping it with castles. Here, for centuries, England contested the land either side of the Wall with Scotland, leaving a trail of wars and raids and forging a tough, self-reliant and independent people.

In time, the border was pacified, and the hazards earlier people faced became part of the magnificent tapestry of a border history which drew people to a now-peaceful but storied and beautiful country, inspiring Scott, Kipling, Turner and William Morris, and the perfectly-placed grand home of the ingenious Lord Armstrong.

This tour offers a wealth of experiences: a remarkable landscape, a deep history, the stern traces of Roman power, the fascinating contact with individual lives carved in stone or left in the organic finds at Vindolanda, the aesthetic beauty of Cragside or Lanercost priory, the reminders of its dangerous past and the fantastic local food and drink. There is no better place to begin an exploration of England’s long history, beautiful countryside and cultural richness.

Check out Paul’s evocative blog post about the Wall and its region.

Our transfer vehicle will collect from Newcastle International Airport at 16.30, and Newcastle Central Station at 17.00, should you wish your arrival at your hotel to be organised by us. If you prefer to arrange your own arrival, check in time is set for 14.30.

Booking Flights
The cheapest way to book flights to join this tour in the United Kingdom is directly with the airline online.

Travel Insurance
Travel insurance is a requirement of our booking conditions and we recommend you investigate the options thoroughly to make sure that your trip is properly covered. Please be advised some insurers may require you to take out a policy within 15-20 days of booking your holiday to receive all of their insurance benefits.

Visas
If you are not from an EEA country you must have a valid passport to enter the UK. It must be valid for the whole of your stay. You may also need a visa, depending on which country you are from. You can check if you need a visa by using the link below.

Custom Tours
If you are thinking of extending your trip to the United Kingdom to include visits to London, South-Western England, Wales or further afield, please contact our office for advice and suggestions for bespoke travel plans. 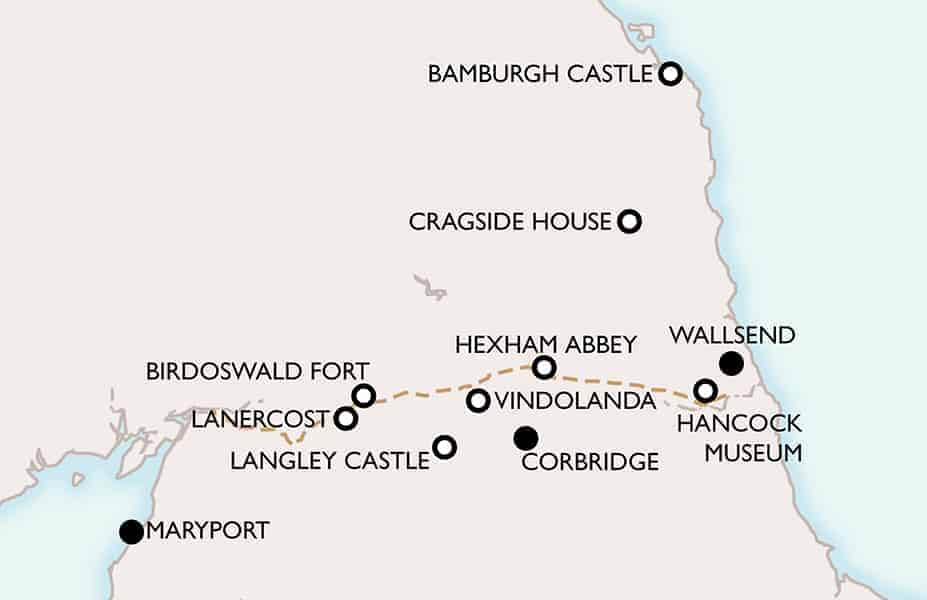 This was our second tour with Peter Sommer Travels. We were most pleased with all aspects of the tour which was well organized around a historical itinerary. The daily agenda, hotel arrangements, dining experiences and professional tour guides all exceeded our expectations. The care, comfort and safety of the client are the first priorities for Peter Sommer Travels. We can most heartily recommend Peter Sommer Travels and specifically their Exploring Hadrian's Wall without reservation.

This was our second experience with Peter Sommer Travels, following directly on their Exploring Wessex tour. As with the Wessex tour, we are delighted to give Peter Sommer Travels an unqualified "excellent" rating on this tour. From initial contact, to booking, to superb coordination by the tour organizers, the excellent knowledge and wonderful humor of our guides, and the selection of tour sites, the trip was organized and run smoothly and with the interests and comfort of the participants always kept in mind. They are by far the best tour operator we have traveled with.