Another bite: Oatmeal-crusted fish fillets - Irish history on a plate

by Heinrich Hall on 23 June 2020 • No commentsAnother bite, Ireland travel

Grain and fish is an old idea: The High Cross of Moone, Co. Kildare, bears a very succinct image of the biblical 'Feeding of the 5,000' (or the 'Miracle of the Loaves and the Fishes'). Reduced to just two fish and five barley loaves, it is essentially a shorthand, implying the whole story and easily recognised by the faithful. It was carved around AD 800.

So far on these pages, we have offered recipes from the four Mediterranean countries we travel, but not from the two more northerly islands we also tour. Let's change that.

Today, I'll present a very easy recipe (in food website slang it's a 'weekday dinner') for a dish I've been served more than once while living and travelling in Ireland: oatmeal-crusted fish fillets. This is not part of the sophisticated and diverse modern cuisine that has developed in Irish restaurants over the last few decades. It is a very homely meal that has been served at Irish family tables for many centuries (at Scottish ones as well, I'm sure!), requiring only few and simple ingredients. Its deliciousness stands and falls with the quality of those.

Its components are in themselves a summary of what foods Ireland has traditionally produced since long before the modern era (and it still produces all of them).

A small fleet of fishing boats on the west coast of Ireland.

In the words of a famous (and very patriotic) song, Ireland is (as islands are wont to) "surrounded by water", namely by the rich fishing grounds of the Irish Sea to the east, the Celtic Sea to the south and the North Atlantic to the west and north. Seafood has played an important role in Irish diets since the very first settlers came there after the last ice age, about 9,000 years ago, and especially in its coastal communities - we sample a variety of it when we travel there.

The green and fertile lands that have given the island its well-known moniker have been used to grow cereals since the Neolithic, some 6,000 years ago. Oats were cultivated at Céide Fields, the exceptional Neolithic field system that was discovered some decades ago in County Mayo (the site is part of our Exploring Ireland tour). In the Middle Ages, long before the arrival of the potato (which proved a very mixed blessing), oats were the chief crop grown in Ireland, and they remain popular to this day, especially in the form of porridge, a dish that was once virtually omnipresent in Ireland, and of the characteristic Irish oatmeal bread. Oats are a slow-growing cereal, sown in winter and harvested in autumn, imbuing them with a richer flavour than wheat. There are some small producers left, still processing their oatmeal in traditional mills. Incidentally, pure oatmeal contains no gluten!

Finally, the recipe also requires a small, but significant, amount of dairy in the form of butter and milk (or buttermilk). Due to the country's mild winters, Ireland has a very special place in European dairy production, as most Irish cattle are grazing outdoors for up to 300 days per year, feeding on the remarkably lush green grass that abounds throughout the island and that has made Irish butter popular far beyond Irish shores.

I suppose this dish is actually a distant cousin of the traditional 'fish and chips' served as street food throughout Britain and Ireland, but its character is quite different, less greasy and with a different balance of aromas and textures. The process of frying the oatmeal coating in good butter gives it a firm feel and a surprisingly rich nutty flavour, a nice set of contrasts to the soft and succulent fish itself.

- 4 good-sized boneless fish fillets, if possible fresh (ideally, about 150g/5oz each. If you can only find smaller ones, increase the number according to weight. Traditionally, you would want to use a fairly oily Atlantic species, such as herring or mackerel - I have certainly been served both in Ireland. If you don't have access to that, use another white fish, e.g. sole or pollock [as I did], and season more aggressively. If you use frozen fillets, make sure that you have given them time to fully defrost, as it is vital that your fish is not oozing water during preparation!)

- a dash of milk or buttermilk

- 80-100g (2.8-3.5oz) oatmeal (ideally, Irish oatmeal, sometimes called pinhead oats, i.e. relatively fine steel-cut oats. I could only find rolled oats on this occasion, and it worked, too, but I'm sure the other type would have been better. The exact required quantity of this ingredient and of and of the ones above depends on the size and number of the fillets you use, so don't be surprised if you need a little more!)

- juice of 1 small lemon (alternatively, another flavourful ingredient, such as vinegar, tomato paste, dill or even mustard)

1. Dab your fish fillets dry with kitchen paper on both sides. They need to be as dry as possible for the coating to stick properly, so to be on the safe side, do it again!

2. Season the fillets with the lemon juice, salt and pepper. Instead of lemon juice, you can use one of the other ingredients mentioned above, or a combination. Especially if using frozen fish, don't be shy when seasoning. Let the fillets rest in a cool place for half an hour.

3. Meanwhile, prepare your breading ingredients. Pour the flour and the oatmeal into two plates or shallow bowls. Mix the milk or buttermilk into the beaten eggs - the mixture can probably remain in the bowl you used for beating, unless it is very large or shallow.

4. Now, the time has come for breading, or rather oating, your fillets, one by one. First, place a fillet on the flour and press it onto it, then turn and repeat. Make sure that the fillet is fully and evenly covered. Next, pull it through the beaten eggs, again making sure that both sides are fully coated. Some people prefer applying the egg mixture with a brush, but I find that it tends to displace the flour coating. Finally, place the fillet on the oatmeal, press and turn, repeat as necessary. Once you have done this to all your fillets, place them side by side on a platter and leave them in the refrigerator for 20 minutes or so (this firms up the oatmeal coating).

5. Heat a proportion of the butter in a (non-stick) frying pan until melted. Once a drop of water tossed in makes the butter sizzle, reduce to a medium high temperature and place the fillets inside - depending on their size and that of the pan, you might have to fry them singly or in pairs. If there's no sizzling sound, your pan is not warm enough. Fry on one side for two to three minutes, then turn and fry on the other for the same amount of time (add a bit of butter if the pan is running dry). You don't want the oatmeal coating to burn, but to take on a golden brown hue (and the roasting aromas that go along with that).

6. That's it! You can serve. This definitely needs a hearty accompaniment. I simply used boiled and buttered potatoes (it is an Irish recipe after all), but there are countless possibilities. Mashed potatoes would work, as would turnips or carrots, green beans or peas, a fresh green salad, and so on.

I hope you have fun with this exceedingly simple dish, reminiscent of the fertile green fields and the even greener pastures of that Green Isle, and of the bountiful waters surrounding it. We hope to introduce you to more Irish cooking on our Exploring Ireland tour! 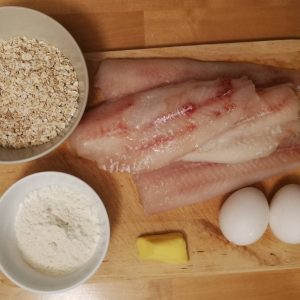 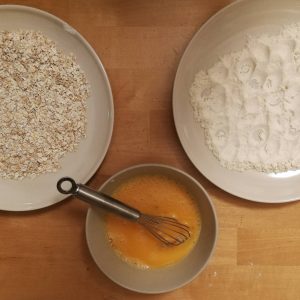 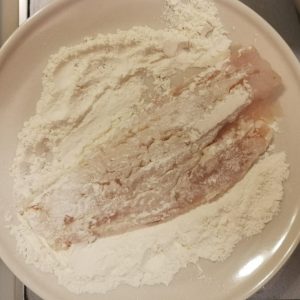 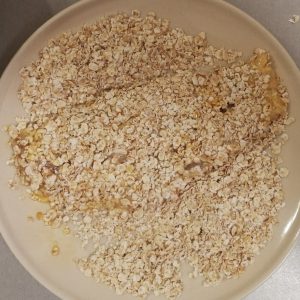 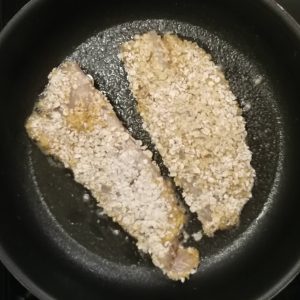 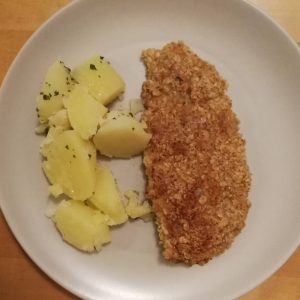