Roma Aeterna – Eternal Rome. We are proud to present Exploring Rome, a tour that has been carefully crafted to offer the ultimate experience of a city that has shaped the identity and history of Europe like no other. Consuls, emperors and popes have decided the continent’s destiny from here, and the rich heritage of Rome’s eventful history is inscribed in every street and stone, in the very fabric of the city, waiting to be discovered.

The rise of Rome is a fascinating tale. From its humble beginnings as a small settlement on the rocks overlooking the marshy ground around the River Tiber, the city came to dominate first Italy and then the entire Mediterranean. At the height of its empire, when it had become a true world power, Rome was a super-city controlling the lands from Scotland in the West to Iraq in the East, the only time this vast area was ever ruled by a single power. The wealth and might of those centuries led to the embellishment of the city with countless monuments and buildings, each telling its own story of Rome’s glory. They include elaborate forums, numerous great sanctuaries such as Augustus’s dignified Ara Pacis (Altar of Peace) and Hadrian’s sublime Pantheon, but also the Markets of Trajan, the vast Colosseum constructed by the Flavians and the great imperial bath complexes of Caracalla, to list but a few.

The loss of that empire was not the end of Rome’s role as a cultural beacon: the city’s central role in western Christendom perpetuated its significance, maintaining an emotional hold over later ages every bit as strong as the military dominance it had once exerted. As the home of the popes, Rome was transformed again with an array of magnificent churches ranging from late antique basilicas bedecked with glittering mosaics, to the delicate masterpieces of the Renaissance and the exuberance of the Baroque. The rediscovery of Rome’s ancient past and its incorporation into later styles have made the city an aesthetic feast for artists and travellers to this day, a place that lives and breathes history at every step and that houses many great treasures, some of which you will encounter in the magnificent Vatican and Capitoline Museums.

Today, Rome is a vibrant modern capital city, existing amongst the many layers of its long history, a fascinating mixture of the new, the old and the ancient. The city effortlessly combines these elements into a unique and stylish whole, a fascinating setting for never-ending discoveries, from the grandiose to the serene and from world-famous highlights to hidden secrets. On Exploring Rome, you will encounter all of that wealth and be inspired by it as so many generations before us have been.

Join us on our Exploring Rome tour and you will be immersed in the story of one of the world’s greatest cities, accompanied by our expert guide, an historical expert and connoisseur of Rome’s charms and glories. Rome will indeed be eternal, as exploring, admiring and enjoying it will be an unforgettable experience.

Day 1: Transfer from Rome Fiumicino airport approx. 30 minutes away, to our hotel for welcome drinks and dinner.
Day 2: We begin with the city’s ancient heart, the Roman Forum. Here, in a small space hemmed in by the great rocks of the Capitoline and Palatine hills, the greatest names of Roman history fought for power and prestige. Amidst an extraordinary concentration of famed and marvellous buildings jostling for space, you will walk where Antony spoke over Caesar’s body, Cicero delivered stinging orations, and the legions processed in triumph. In the afternoon, we visit the wonderful Capitoline Museum where famed works are displayed in a setting by Michelangelo.
Day 3: We visit the magnificent Markets of Trajan, where a Roman street remains miraculously preserved overlooking the imperial forums. We then tour the colossal Baths of Caracalla, a lavishly decorated imperial gift to the city’s people. From this lavish setting, we go in the afternoon to the humble and touching subterranean catacombs just outside the city.
Day 4: We tour the elegant Campus Martius district, centrepiece for imperial monuments and refined Renaissance palaces. We begin with the majestic Ara Pacis, the Altar of Augustan Peace, with its scenes of serene religiosity housed in a splendid modern museum and then pass to the superlative Pantheon, surely the most beautiful interior ever created. From placid piety, we move in the afternoon to the rugged power and brutality of the Colosseum where imperial authority was shored up with gladiatorial blood.
Day 5: From imperial Rome, we turn to Papal Rome. We feast on the wondrous collections of the Vatican Museums and arrive at the unforgettable Sistine Chapel before taking in the magnificence of St Peter’s itself, a fitting way to end a week of precious memories.
Day 6: Transfer to Fiumicino airport.

(It may sometimes be necessary to alter the timings or order of the days.)

Booking Flights
The cheapest way to book flights to join this tour in Italy is directly with the airline online.

Travel Insurance
Travel insurance is a requirement of our booking conditions and we recommend you investigate the options thoroughly to make sure that your trip is properly covered. Please be advised some insurers may require you to take out a policy within 15-20 days of booking your holiday to receive all of their insurance benefits. 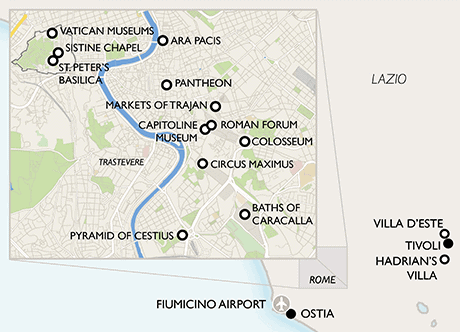 The whole experience was brilliant. Very well put together in both the sites we saw and the sequence of visit, it was really made for us by the excellence of our guides. Their knowledge of Rome and the Romans is second to none and their delivery makes it living history. We feel certain that any trip that Michael and Paul were running would be excellent and would not hesitate to recommend them. Paul especially was so good in both his knowledge of the subject - the history of Rome and of the Romans - and in the way he put it across, he had our rapt attention all the time and really brought it all to life. The organisation was great, with good attention to where we ate as well as what we saw, which made it a full experience not to be forgotten. In our view too, good value for money. The structure of the tour and the quality of the guides was second to none. They really do know what they are talking about and how to bring it alive - and fun - for the visitor. Not just that, but they are great people to chat with too! Everything went very smoothly and there was very little if anything that we would wish to have done differently. Nothing was too much trouble. A good mix on being with the group and time on our own if we wanted it. We would certainly recommend Peter Sommer Travels - and already have to friends who have made a provisional booking!

I had thoroughly researched several cultural tour options and read many great reviews about Peter Sommer Travels before booking so I expected a great tour. However, my experience was beyond what I had imagined. Having been to Rome several times already I was astonished at how much I’d missed during prior visits. Our host/guide took us daily on a lively, fascinating journey, sharing ancient Rome’s people, places, art, architecture, historic sites and mysteries. We experienced some of the city’s top restaurants and stayed in a lovely hotel that was built as a convent in the 15th century. The days flew by and I learned more than I could ever have imagined. This is a unique and unforgettable experience. I highly recommend Peter Sommer Travels, and hope to use them again in the future. Our guide was super knowledgeable, an outstanding teacher, organized, conscientious, funny and gracious.